Wheel Blacks off to Paralympics 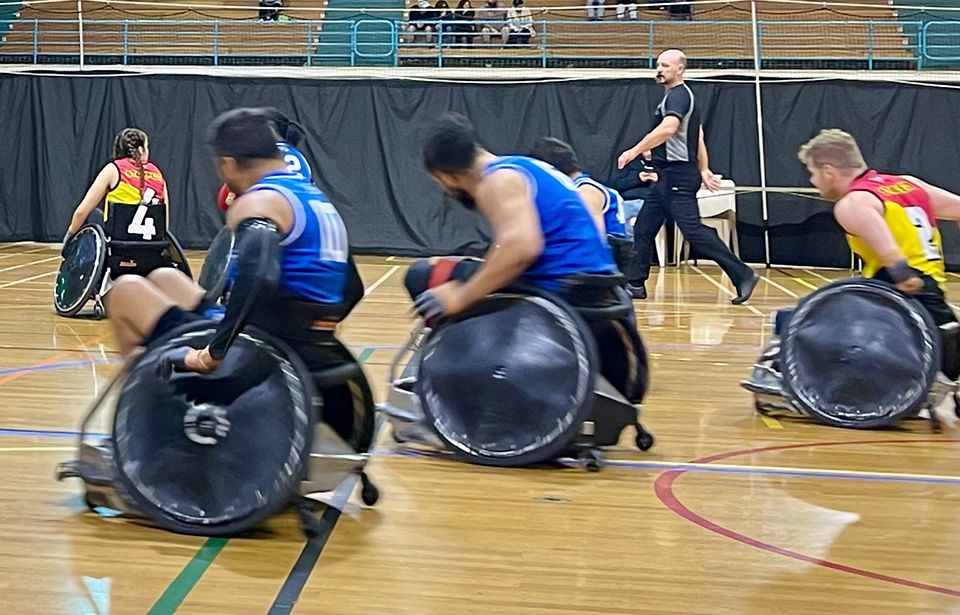 Stars from the Wheel Blacks were part of the action. Photo: Chloe Bardsley

Wheelchair rugby is back on the rise after the New Zealand Wheel Blacks qualified for the Paralympics for the first time since 2008.

Eight players were selected in the Wheel Blacks team, which is led by captain Cody Everson.

The Wheel Blacks will compete at the Wheelchair Rugby National Championships in July, in the build-up to the Paralympics.

In wheelchair rugby, like every high-performance sport, a grassroots community is where it all starts.

The sport was on full display for the second round of the Wheelchair Rugby Competition (WRC2) at the Barfoot and Thompson Stadium at Selwyn College recently.

Sixty-one athletes, aged from 17 years old to over 50 years old were involved in the competition. Players of all abilities and disabilities were included in the teams.

From social players to the high-performance Wheel Blacks, everyone was there to compete hard.

Able-bodied athletes can also get involved, using wheelchairs to compete, supporting their family members or just to have some fun.

Each athlete is classified on their ability, ranging from 0.5 with little ability to 4, athletes with the most ability.

Four players are on the court at any time, but the team can only have a maximum 8 classification points on court.

Most of the athletes involved in wheelchair rugby have gone from being fully able-bodied to have to re-learn how to use their body overnight, says Cameron Leslie, a 2020 Wheel Black, who will head to his fourth Paralympics.

The competition was open to the public and family gathered in full support of the athletes.

Georgia Mecchia, an athlete from the round one unbeaten DG Sport Waikato Stampede team, had her entire family cheering her on.

Georgia is only 17 years old, but she is a seasoned competitor, playing for three years. She is also one of very few females in the competition.

She experiences debilitating leg tremors and was diagnosed with central sensitisation fibromyalgia this forced her give up the able-bodied sporty life she knew.

Georgia says she went along to one wheelchair rugby training and fell in love.

Georgia did not hold back when taking the court against the Healthvision Auckland Rhinos, despite being up against three Wheel Blacks.

“I love the rough and tumble of the game,” she says.

Auckland team member and AUT student Lui Teo says being part of the wheelchair rugby community has helped him recover from a life-changing spinal injury.

“Everyone in the wheelchair rugby community just makes you smile. They make you think that being in a chair is not as bad as it is.”

*The Paralympics will take place from August 24 to September 5.