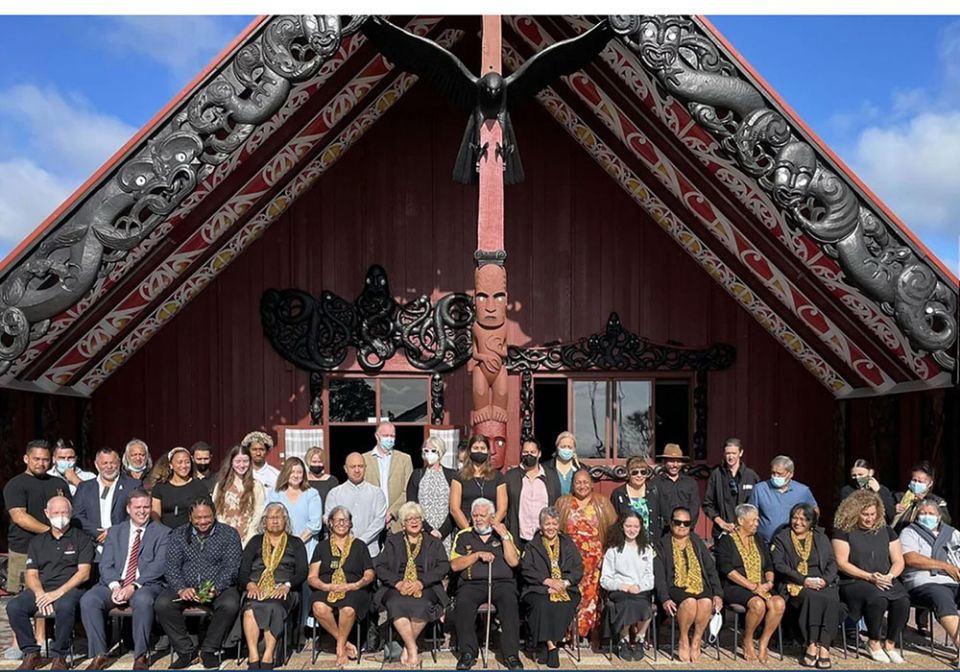 Members of the Northern Kāhu basketball team and Ngāti Whātua Ōrakei during a visit to bless their team name. Photo: Supplied.

The official naming was led by Basketball New Zealand and kaumātua Dr Taku Parai [Ngāti Toa], while cultural advisors and local iwi worked with each team to create their name.

“The priority for us was having a really strong Te Reo vein through the league. It’s something we’re trying to improve in basketball New Zealand in the workplace. Trying to normalise the use of Te Reo, and we thought that needed to extend to what we do outwardly,” says Tauihi general manager Huw Beynon.

Parai says the names represent the strong influence of Māori and Pasifika players in the league.

"The word ‘tauihi’ means to soar. “It doesn’t pinpoint one actual team, one actual person, but it’s about being graceful, about soaring, about reaching high,” Parai says.

The creative process spanned months of discussions, creating a relationship with the iwi and finding a name that aligned with the Māori concept.

The kāhu is a majestic bird and the kāhu pokere (black hawk) is the kaitiaki (guardian) of Ngāti Whātua. The feathers are often used to make Maori cloaks.

“It embodies the journey. It’s a bird that’s gliding across a valley. It’s a beautiful bird but it’s also a predator bird, so we’re in the sports space and we liked those connotations,” Northern Kahu director Stephen Dil says.

“We liked the idea of the feathers of the kahu being prized and being used by those who are chiefly.”

The process of receiving the blessing was an empowering experience for Dil and the Northern Kāhu whanau.

Members of the franchise attended the Ōrakei Marae to present the ‘kāhu’ name to the kaumatua [elders].

Dil says it was about “bringing our kaupapa (principles), our reason for being at the Marae and bringing the name, to seek acceptance and ultimately the blessing of Ngāti Whātua.”

“It really was a beautiful day.

"The blessing “symbolises partnership, they’re part of who we are, we’re part of them now and so we have to recognise that comes with responsibilities. We need to make sure we always do things right and carry the mana that comes with that.”

The Kāhu have arranged for their players to hold coaching clinics at the marae, while Ngāti Whātua Ōrākei have talked about taking vans full of supporters to watch their games.

“Our whakataukī ‘mā te Kahukura, ka rere te manu, ka rere runga rawa’ means to adorn this bird with feathers and let her fly, let her soar. That encapsulated our idea of a young girl picking up the game of basketball and using that as a vehicle to be successful in life,” Dil says.

This vision is spoken about frequently within the organisation.

“We’re in the process of helping people to grow their feathers.”

Shontelle Matano · The Story Behind The Northern Kāhu