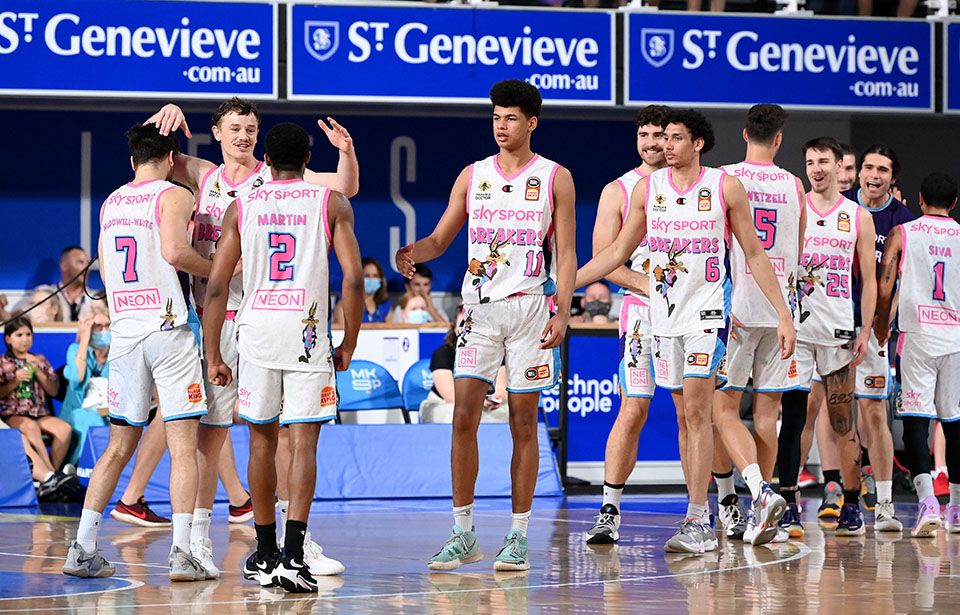 The Breakers celebrate during a game in Brisbane this season. Photo: supplied

The New Zealand Breakers are finally coming home with local games and venues being booked for the season's start in October.

After two seasons playing in Australia away from family and fans, the team will return home after finishing their 2021/22 season on April 24.

Breakers chief operating officer Lisa Edser says the club is eager to return to normal again despite the economic challenges caused by the pandemic.

“Prior to Covid, everything was going really well. We were selling out Spark Arena and having great crowds at our regional games."

It will be hard for the club to recover from the financial loss, she says.

"But in terms of the Breakers recovering emotionally, moving forward, I believe that we absolutely will. Everyone will bounce back,” Edser says.

Having the team home, will also bolster Auckland’s economy and re-establish what had become a must-see event for many basketball fans pre-Covid.

People can expect an entertainment experience that caters to longtime supporters and new fans, she says.

“We can’t wait to host a home game again. We will regain the momentum we had a few years ago and build on the game day experience.

"It’s about bringing a good mix of sport, music, entertainment and directed at a family fun time out. But also providing a product that caters to a really broad market.

"One of the important things for us is having our fans walk away from a game whether we’ve won or lost, feeling like they’ve just had the best day.”

Sky Sport associate producer Isaiah Smiler says having the team at home is crucial for the ongoing development of basketball for the younger generation.

“It’s going to be absolutely brilliant just to see the boys back at Spark. We got a small taste of that in 2021, but it’ll be nothing compared to when the Breakers are back full time.

"Considering how fast the game is growing in Aotearoa, it’s really imperative that our rangatahi can see these guys on court in a home setting again. Plus it’s just a lot of fun being at those Breakers games. They sure know how to put on a party.”

The team hasn't been able to achieve positive results on the court, sitting in last place on the NBL standings, but playing at home will give the players and followers something to look forward to.

The Breakers are calling on their fans to stay with them. “Stick with us, it won’t be long," says Edser.