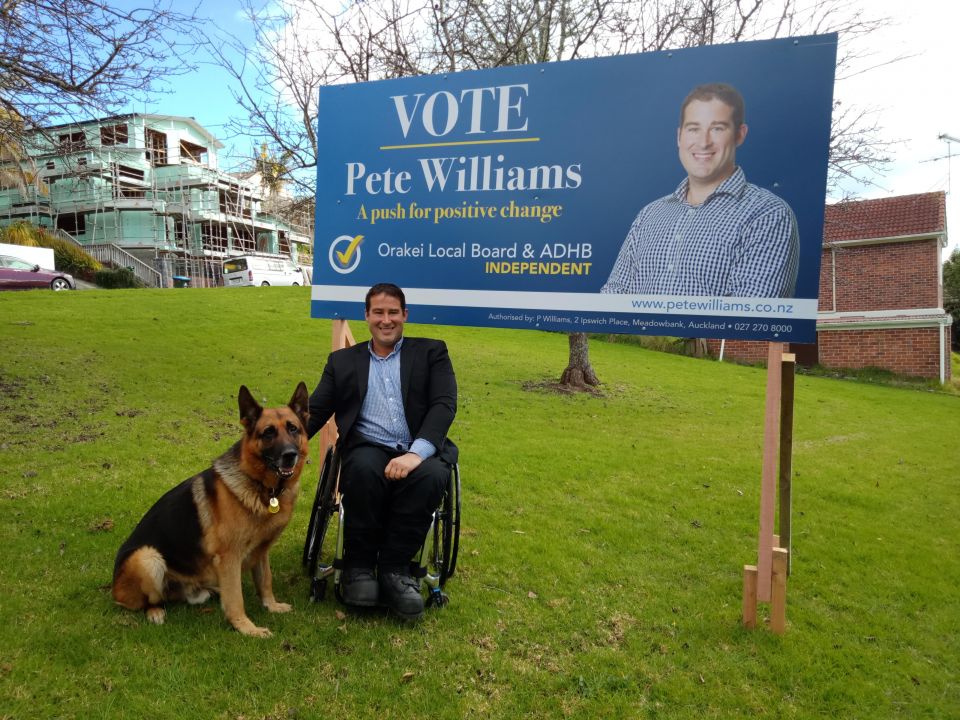 A prospective independent candidate for Ōrākei Local Board has been defying the odds since he was born, and is now challenging others to do the same.

Pete Williams was born with spina bifida and said his motivation to run for the council and the Auckland District Health Board comes from wanting to bring his lived experience into the boardroom.

“This is not about me, this is about the 20 per cent of our population who can’t access a park or a beach, or public transport,” said Mr Williams.

“It’s not just about accessibility for wheelchairs, it’s the elderly or someone who has broken their leg and discovers [that] to get to their favourite café or beach they have got to walk up or down 20 stairs.  We need to be an accessible city.”

At birth, doctors predicted a short life expectancy of only three weeks for Mr Williams and they told his mother not to bother to feed him, he said.    Now 35-years-old, he was one of the youngest candidates in his geographic area by 15 years.

“I’ve had over 50 operations and have spent approximately 10 percent of my life in hospital, so I thought everyone else is coming from a [medical background] so I bring a different skill set to the district health board,” he said.

Despite facing several hurdles in his life, Mr Williams never let them stop him. He graduated with a communications degree majoring in television from AUT, and competed at the 2010 Winter Paralympics in the giant slalom on modified skis.

Ministry of Social Development director Brian Coffey said sharing how people integrate diversity into their lives creates a society that works for all.

“Everyone expects and most people benefit from accessible spaces, transport, buildings, workplaces, events and information.

“For disabled people, they are too often in a position where they hope for the kind of accessibility that others expect,” he said.

Mr Coffey said having decision makers that understand the benefits and opportunities that greater accessibility will achieve, is important.

“Having a lived experience brings a reality and possibility that should be valued and acted on.”

The local government elections are scheduled to begin on October 12.