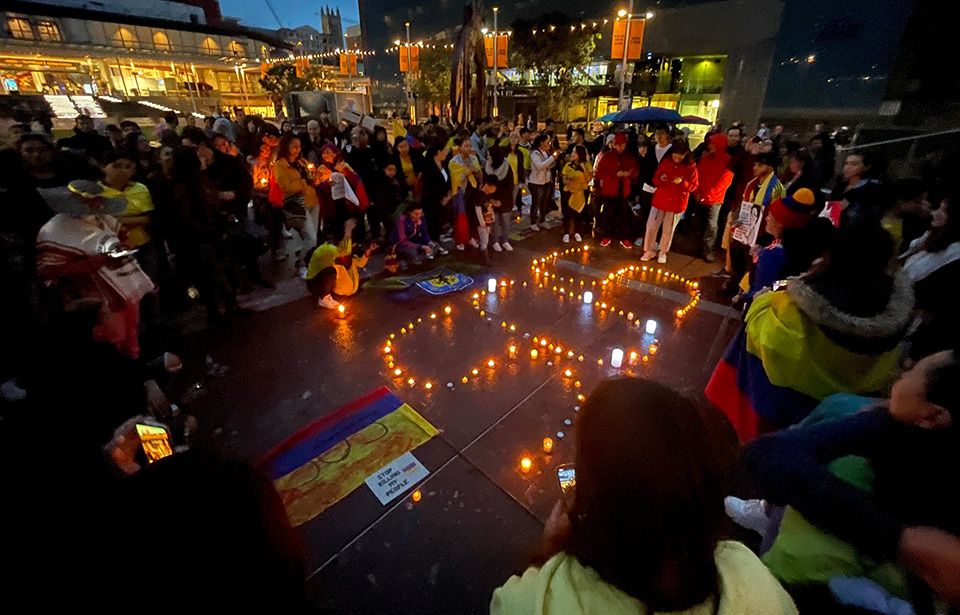 Colombians in New Zealand gather in Auckland in support of protestors back home. Photo: Kate McVicar

Colombians in New Zealand gathered across the country on Sunday in support of compatriots back home protesting against their Government.

The ongoing protests in Colombia began in late April in reponse to unpopular tax reforms and have resulted in at least 26 deaths.

The number of Colombians living in poverty reportedly grew by 2.8 million in 2020.

The Auckland protest on Sunday was supported across the country, with Colombians nation-wide holding solidarity events over the weekend.

With speeches, music, and memorials, the event was also a celebration of Colombian culture.

Dance was a large part of the afternoon. Attendees told TWN Colombian citizens were being shot on the street for doing the same thing they were that day, dancing.

Participants hoped to share messages of awareness, love, and support both locally and internationally.

“We are here for a big cause which is to send love to our people. The country is going through a really challenging time," an organiser, who declined to be named, said.

"We want to send a message of compassion and empathy. And we want to share that from [New Zealand].”

He sais felt the world needed to shine a spotlight on Colombia during this time and have empathy for the nation.

One woman felt she didn’t get a lot of support from her Kiwi friends regarding the protests and was disappointed with the lack of engagement.

Protestors said they hoped their movement could spark some action from the New Zealand Government.

“Hopefully, the Government can help us write a letter of support and solidarity,” one woman told TWN.

The New Zealand embassy in Colombia issued a statement on Twitter expressing concerns about the reported human rights abuses, and acknowledging the right to peaceful protest as fundamental for a democracy.

Meanwhile, other organisations came out in support of the event, including the Unite Union and the Socialist Aotearoa society.

A representative from Unite Union said: “The Unions in Colombia are on the frontlines of the struggle for justice and equality there, and are having a general strike to try change government policies and have been shot as consequence. So we are here to try and give them some support.”

Joe Carolan, from Socialist Aotearoa, said Colombia was one of the most dangerous places in the world for unionists.

"To be a union organiser is usually to risk death from paramilitary, right-wing, death-squads.

"And now at the minute we see, with the people's movement against unfair taxes, a huge general strike where unfortunately right-wing violence is being directed towards unions.”