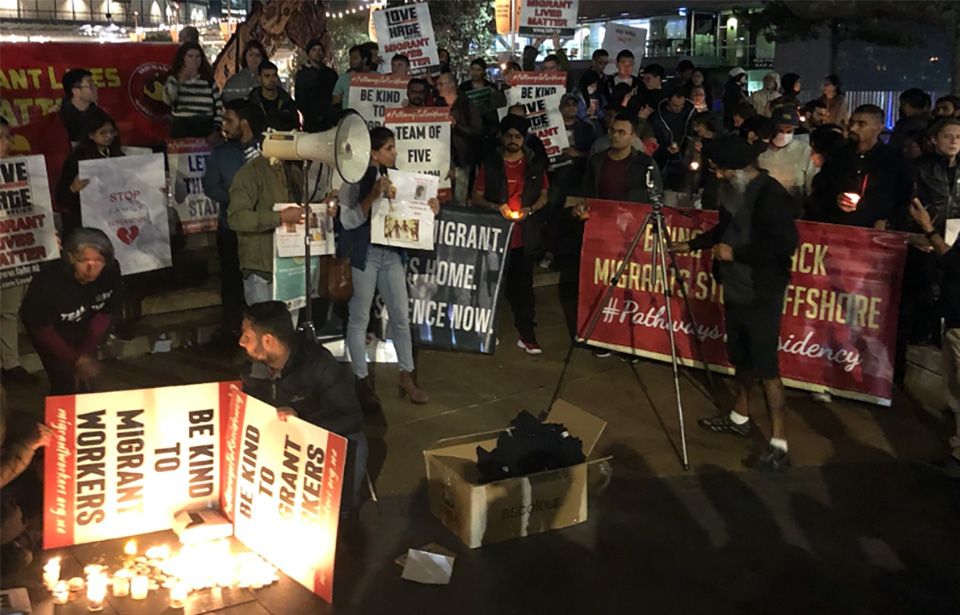 The vigil in Aotea Square, organised by the Federation of Aotearoa Migrants.

More than 100 chanting supporters for migrant rights showed up to a vigil in Aotea Square on a rainy night last week.

“Every time people are close to becoming eligible for residency, they go and make the rules more strict.

“The goalpost keeps shifting,” she said.

Supporters gathered at vigils across the country on Wednesday night for those unable to make an immigration protest in Wellington the next day.

The Wellington protest hoped to sway the debate about migrant rights happening in Parliament.

Thursday’s protest was not the end of this, Ms Kaloti said. ‘’This is a campaign and a movement that we will keep going.’’

The vigils and the protest were organised by a collaboration of four groups called the Federation of Aotearoa Migrants (FAM). Those groups are the Association of New Kiwis Aotearoa, the Migrant Rights Network NZ, Migrants NZ and the Migrant Workers Association.

The Aotea Square vigil involved several representative speakers from FAM as well as members of the public sharing their stories.

The protesters demanded migrants stranded offshore due to Covid restrictions be allowed to return to the country they call home.

The first speaker, Ms Kaloti, said she believed New Zealand should live up to the Prime Minister’s compassionate reputation and ‘’actually make some changes rather than just keep recycling our migrant workforce”.

Mike Treen, national director of Unite Union, said: ‘’You were told a lie in order to come here.

“The Government has to say to these people in New Zealand, we will live up to the promise we made to you. We will transition you to permanent residency. We will allow your family to join you,” Mr Treen said.

“And the ones who are stuck overseas, who went home temporarily, who had already made New Zealand their home, they too should have the right to come back.”