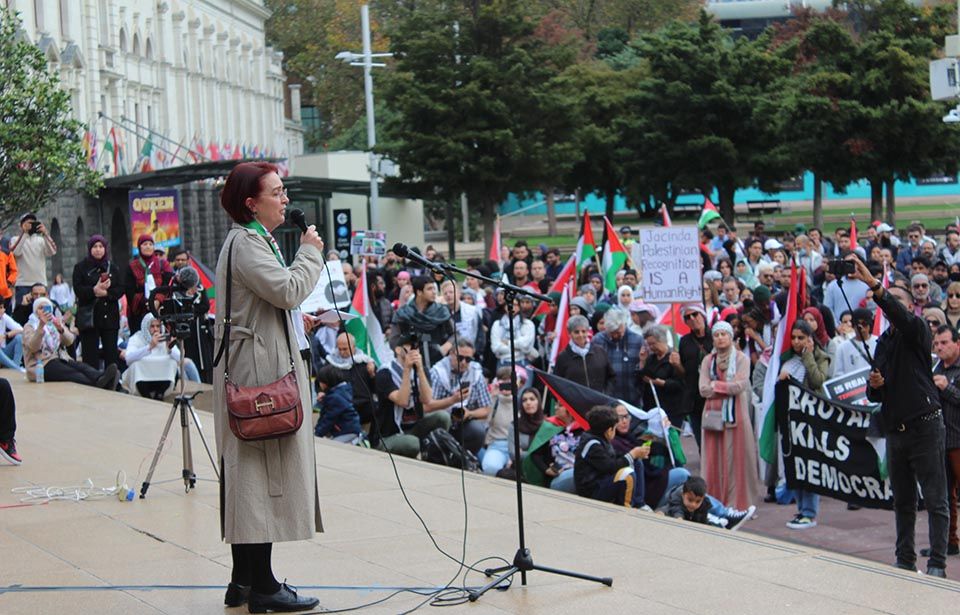 Calls were made for the New Zealand Government to recognise Palestine as a state and for the Israeli embassy here to be shut down.

The Palestine Solidarity Network of Aotearoa organised the rally, which included an installation of more than 50 frames featuring photos of children killed in Israeli airstrikes over 11 days.

A range of people gave speeches, including Labour Party MP Dr Deborah Russell, who was met with backlash from the crowd.

A freelance journalist and columnist for Stuff, Donna Miles, spoke after Ms Russell, saying: “To Deborah Russell, Labour MP, what is going on is not complicated to understand. One is the occupier, the other one is occupied.

"What is complex and difficult for you to understand?”

“It really was not good enough for Deborah Russell, a Labour MP, to feign ignorance about the recent events, claiming it was too 'complicated' for her to understand,” says Ms Miles.

“I called her out because she had turned up to a pro-Palestinian protest, unwilling to clearly condemn Israel’s disregard for international law,” she says.

Ms Miles says Russell’s apathetic speech represented a clear example of why Israel has been able to get away with murder for so long.

Minas Al-Ansari, an organiser pof the protest, says she was shocked at the MP’s speech, which was an unfortunate and prime example of ignorance.

“When attending a rally devoted to the Palestinian cause, some research on the topic would have made her look and sound a lot better,” says Ms Al-Ansari.

Ms Al-Ansari says she was expecting the MP to talk more about her support and commitment to standing with justice, especially within the Labour party and New Zealand Government.

Noor Najm, an activist for the Palestinian cause, says she expected the MP to be well-versed in what she was going to say and expected her to have done her research.

“Disappointingly, I have been proved wrong,” says Ms Najm.

“Why are you speaking on the pain, blood and tears of countless Palestinian martyrs when you don’t know? Learn the history before suggesting a two-state solution. Listen to and learn from Palestinian voices. And it is not a ‘conflict’, it is genocide” says Ms Najm.

Following the speeches, the crowd marched down Queen St from Aotea Square down to the US Embassy in Customs St, chanting outside the building.