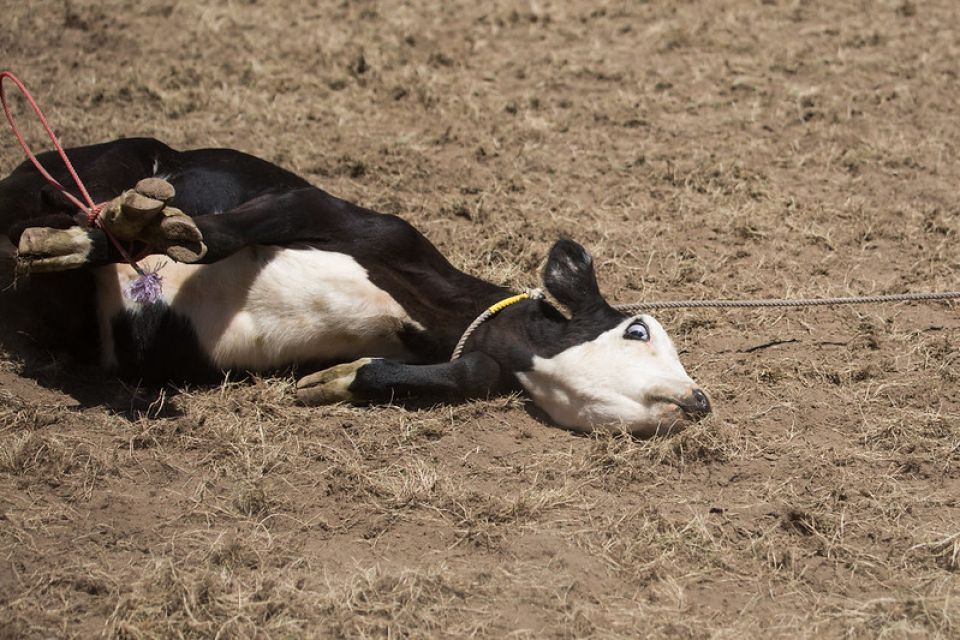 A calf’s neck and three of its legs tied together in a rope and tie event, which the government promised to ban in 2017. Photo: SAFE

But as fans start saddling up, the Rodeo Cowboys Association argue their sport has always been "overly scrutinised".

Meanwhile a bill to ban calf roping, steer riding and wrestling under the Animal Welfare Act hasn’t been pulled out of the members ballot yet. The Government also has yet to deliver its pre-election promises in 2017 to scrap parts of rodeo.

Will Appelbe, of animal rights organisation SAFE, says these coming months before the election would be best time to walk the talk and ban some of the worst aspects of rodeo.

This includes the rope and tie, which involves young calves being chased by a rider on horseback and lassoed around the neck.

The Rodeo Code of Welfare report in 2018 advised against using calves in all events, but the Rodeo Cowboys Association says it has made all the necessary changes.

“The recommended standards is not to use calves, but the minimum standards say we can,” said president Lyal Cocks.

He argues there is nothing wrong with using calves, saying they are only used in one event.

"It's already the most scrutinised animal sport in New Zealand,” said Mr Cocks.

“The problem with the code of welfare is it’s not legally enforceable,” said Mr Appelbe.

“It’s a loophole to allow rodeo cowboys to do the things they do to animals.”

Earlier this year, a rider breached the welfare code at a steer wrestling event in Urenui, when he wrestled a bull for 12 seconds longer than he should have.

However, the Ministry of Primary Industries, which had the steer assessed by a vet and found no injuries, concluded although there was a breach, no offence was committed under the Animal Welfare Act and blamed a breakdown in communication.

Mr Cocks says there are accidents in rodeo like any other sport.

“You can’t prevent all accidents. You don’t drive cars, you wouldn’t have any car accidents. Is that the answer, not to do anything?”

“I hope after the next election we have a government who acts on the independent report commissioned by parliament itself and gets rid of those worst activities”.

“Better yet, I hope it’ll become an election issue”.

Will Appelbe explains here how the Rodeo Code of Welfare was a factor in downgrading New Zealand’s animal protection ranking from an A to C.