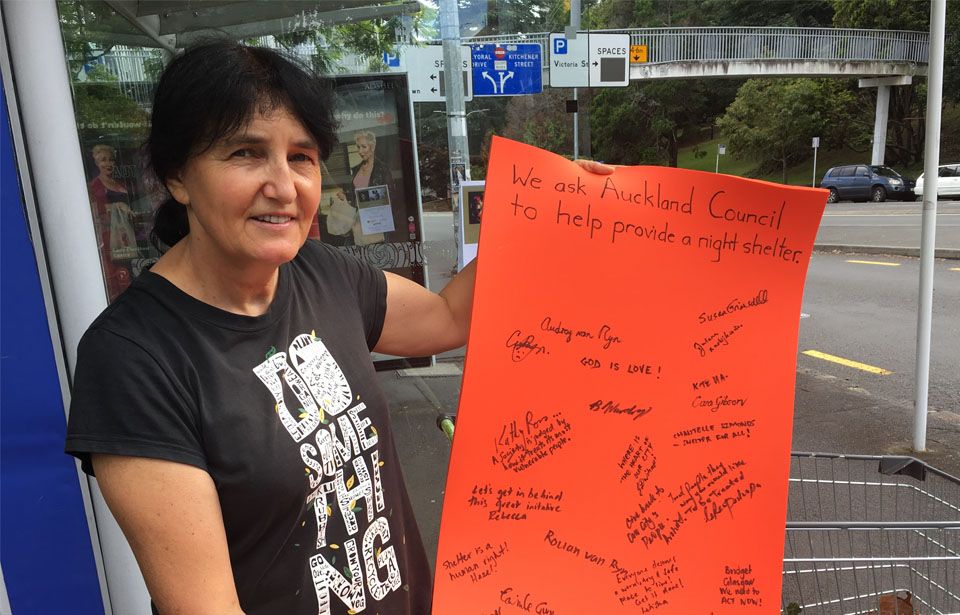 The council needs to stop thinking “we are doing enough” to combat homelessness, says a local campaigner petitioning for Auckland to get a night shelter.

Audrey Van Ryn has campaigned for two years for a night shelter and presented her petition under the ‘AK Have your say’ submission process for the city’s 10-year budget plan.

“Increasing numbers of people are sleeping rough in Auckland. In shop doorways, under bridges, in parks and in their cars,” said Ms Van Ryn, who believes a night shelter would provide somewhere warm and comforting for people in vulnerable positions.

Despite many other major New Zealand cities having a night shelter, the Auckland CBD shelter was closed in 2012 and Ms Van Ryn said “many members of the community have expressed their dismay that in our country such a situation could be allowed to continue.”

However, Amanda Kelly, specialist advisor for the council’s community empowerment unit said the previous night shelter was under-resourced with empty beds, and the council had no mandate to support a future shelter.

The council were focussed on supporting other ventures, including a $830,000 fund towards emergency housing and rough sleeping initiatives and has allocated $1 million to Housing First, said Ms Kelly.

Ms Kelly said if a night shelter was established, it would need to be aligned with what’s already happening and “ensure its not taking resources away from Housing First.”

But Ms Van Ryn said she hopes her online and paper petitions show the council that a night shelter is important for Aucklanders and putting money into Housing First isn’t the only way to solve the homelessness crisis.

“Within Auckland council and elsewhere, the view is held that Housing First is the only solution to homelessness and that because the programme is in place, we are doing enough,” said Ms Van Ryn.

Ms Van Ryn said Housing First, which aims to help homeless people into housing, doesn’t provide enough homes “for the thousands of people in Auckland who are without a home, who simply have nowhere to go.”

Matthew Mark, Christchurch’s City Missioner, said securing homes for all homeless was a long way off, so a night shelter was an essential temporary solution.

“Not everyone fits into that nice clean box of getting into social housing or private rentals,” said Mr Mark, who believes the night shelter is a “core element and opportunity to serve our community.”

Regardless of the council’s response, Ms Van Ryn said she will continue to campaign for a night shelter.

Housing First was contacted but were unavailable for comment.