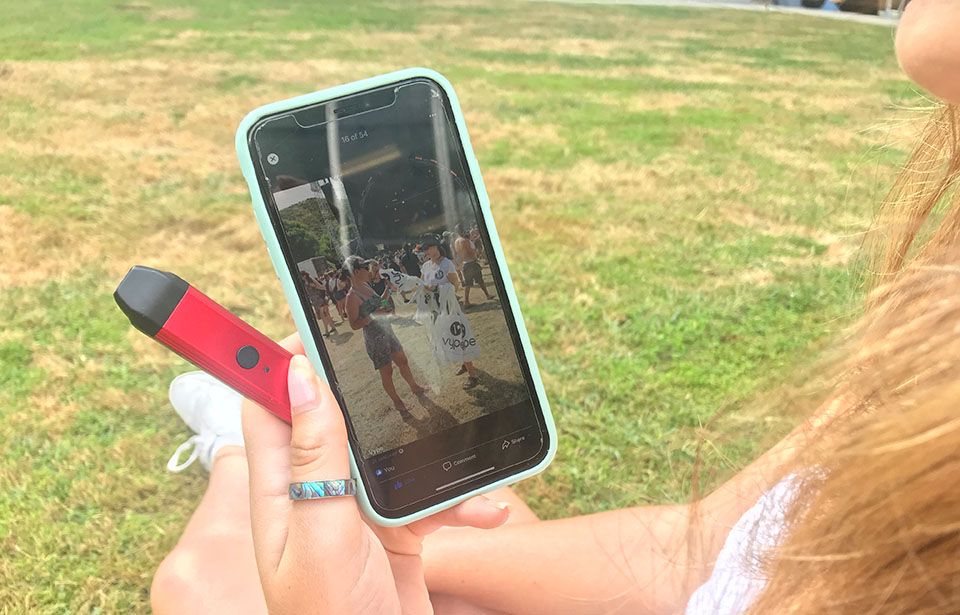 A partygoer who picked up her first e-cigarette at a music event reminisces on the festival season. Photo: Larissa Howie

E-cigarette companies who targeted festival-goers over the summer want to get young people “hooked for life” says a consumer-behaviour expert.

A flurry of vape promos at music festivals got in ahead of draft vaping legislation introduced to Parliament  on February 24.

The legislation would ban advertising and sponsorship of e-cigarettes such as activities at festivals.

Young people across the country flocked to popular R18 concert destinations over the summer with up to 30,000 revellers attending Rhythm and Vines in Gisborne and around 10,000 at Rhythm and Alps in Wanaka.

Both events were heavily sponsored by ‘Vype’ which is the flagship vapor brand for British American Tobacco New Zealand (BATNZ).

Senior lecturer of marketing at Auckland University of Technology, Sommer Kapitan, says e-cigarette companies who sponsor music events are after the brand loyalty of younger consumers.

“Music festivals are clearly not targeting 50-year-old smokers, they are targeting younger people who might be attracted to how this looks and how being a vaper might make them appear”, Dr Kapitan says.

“It’s the start of a habit. And if you start that habit young, marketers know they’ve got you for life”.

Dr Kapitan says people exposed to the heavy presence of vape sponsorship at festivals are more likely to consider taking up vaping.

“It would take that plus the fact that the social circle around you are also interested in vaping”, she says.

However, according to Kapitan, it is the responsibility of the Government rather than advertisers to protect the well-being of young people.

“Government's job is to regulate and make sure people are safe. If marketers are told they are not allowed to freely advertise this, they will obey,” she says.

“It’s a capitalistic society and we need this banner of regulation legislation to help us ensure that we’re being safe”.

AUDIO: Sommer Kapitan on how e-cigarette marketing gets young people hooked on nicotine.

Vaper Emily Dickie, 21, says many of her non-vaping friends received free e-cigarettes from sponsors at the Rhythm and Alps festival held in Wanaka in December and have taken up vaping as a result.

Vaping and cigarette company British American Tobacco NZ (BATNZ) say it had highly trained on-site staff who made sure the people they approached were existing adult smokers or vapers before allowing them to trial Vype.

“We believe that all adult smokers, including those aged 18-24, should be better informed about the potential benefits of switching to vaping”, says a BATNZ spokesperson.

Professor Janet Hoek, a public health and tobacco advertising expert says these types of event campaigns are targeting a whole new generation of young people who will become reliant on nicotine.

The levels of nicotine in the vapes concern Professor Hoek, who is worried about the psychosocial well-being of non-smokers who take up vaping.

“People in our studies have talked about how quickly they become dependent on vaping.

“It’s a very unwelcome surprise and not an experience that they enjoy”, says Prof. Hoek.

She says while festival campaigns may be great for the profits of vape companies, they are not so good for public health or wellbeing of those individuals.

The new vaping legislation bill will be read in Parliament for the first time this month before being passed on to a Select Committee stage where the public can make submissions on the Bill.