Patients in pain jump on the phone for physio appointments 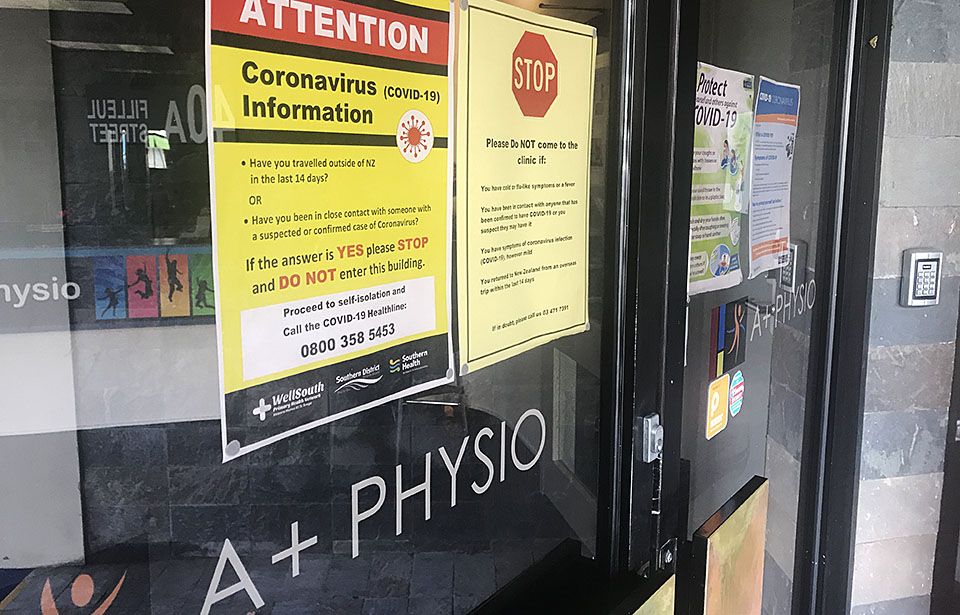 The front doors of the clinic plastered with Covid-19 posters show just a tiny part of the health and safety measures in place to allow them to reopen. Photo: Larissa Howie

Bookings for hands-on physiotherapy started filling up as the Prime Minister announced the shift into level two, allowing physios to reopen this week.

While virtual appointments served some people well during the lockdown, elderly patients and those suffering significant pain have struggled, says physiotherapist Anna Ory.

“It’s been really hard to watch from a distance,” says the owner of A+ Physio in Dunedin.

Physio practices had to close their doors when the country went into lockdown and appointments have since been delivered through an online programme called Telehealth.

But Ms Ory is worried for clients Telehealth has not been able to reach, especially the elderly, and she wants to get them into the clinic as soon as possible.

“All of those people inquiring while the announcement was going on, they were in acute pain.

“My most heartbreaking was a 90-year-old who is hard on hearing and doesn't have access to video calls. She said she would rather just go out and catch coronavirus because that would take her out faster than her agonising back pain," says Ms Ory.

She says some of her patients have been experiencing poor mental health as a result of suffering through pain which can be excruciating and interferes with daily living.

“There have been weeks passing with an increasing number of calls where the clients are clearly stressed. They have just had enough of being in pain and not accessing help."

She says the pain relief patients get from hands-on treatment is not able to be delivered in the same way over the phone.

“We could hear these stories from them, but they were still left in pain," says Ms Ory.

Chief executive of Physiotherapy New Zealand Sandra Kirby says there is an ongoing place for virtual appointments through Telehealth, but they are not comparable to seeing a physio in person.

She believes Telehealth is “another tool in the toolbox” for physios to reach patients who cannot get into a clinic or have health conditions that put them at risk.

But, it will not be the “new normal”.

“I don't think anyone should detract from the fact that face-to-face is better for most people.

“But where face-to-face couldn't happen, the fact that you could get some treatment is great," says Ms Kirby.

She says the sector has been facing a financial loss of around $5 million a month and physio practices are looking forward to getting patients thought their doors again.