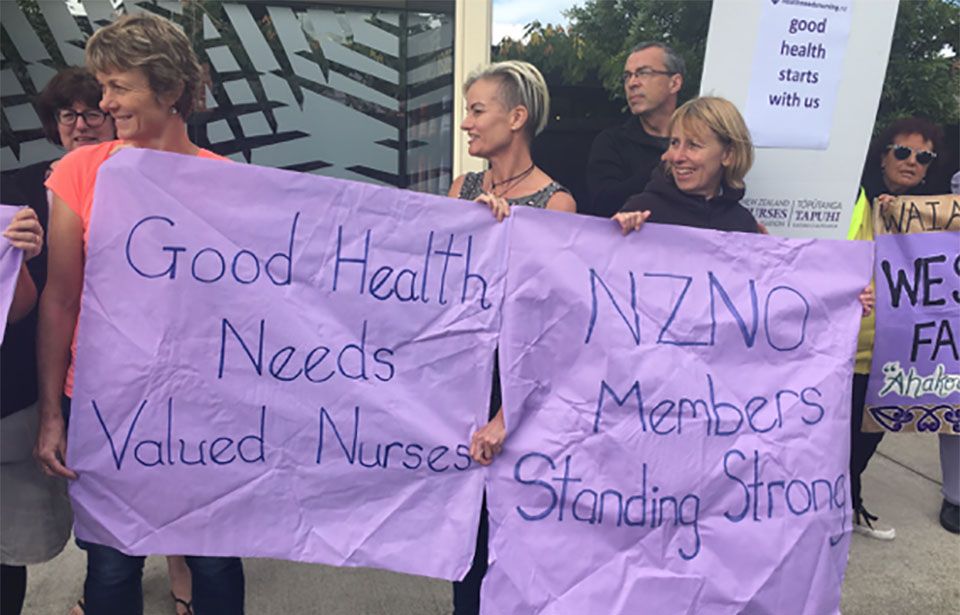 Around 100 people turned up to a recent rally over the road from Tauranga Hospital to support Tauranga nurses insulted by their latest pay offer of two per cent.

The rally ran from noon to 1pm and included megaphones, chanting, cheering and cars tooting in support of the nurses.

District health boards and nurses are still negotiating a settlement but this week, with midwives, nurses voted to reject the two per cent offer.

“Nurses, like other public servants are pulling the brunt of low pay rises which hadn’t kept pace with inflation. We need more.”

The rally was about raising public awareness of nine years of underfunding nurses have had to endure, said Mr Matthews.

MrMatthews hopes to get public support to push the government and district health boards into realising they’ve got to front up with a decent wage offer.

A registered nurse herself, Tuck said nurses were tired of being undervalued.

Many New Zealand nurses held a degree qualification and further postgraduate study but didn't get recognition unless in senior positions, said Tuck.

“There’s a high turnover of nurses leaving because they’re not being recognised,” she said.

“A pay increase will increase patient safety because more nurses will come into nursing.”

A global nursing shortage will get worse in the next 10 years as nurses retire, said Tuck.

She thought work conditions and pay rates were discouraging young people to work in the field.

Teachers' union members were at the rally in support  of nurses.

“Over years and years, they just keep devaluing the job and [nurses] have to go three or four years for the qualification. It’s ridiculous what they expect to pay them,” said Ms Rae.

“Two percent is an absolute insult,” she said. “This is widely felt and deeply felt, so this is very, very important.”

Public Service Associaton convener Jacky Maaka said nurses' workload was too high and their pay rates offensively low. "They need to be recognised for the true value that they bring.”

Ms Maaka said there would be a ripple effect from the nurses' bargaining. Other unions, including the PSA, would follow with similar demands.