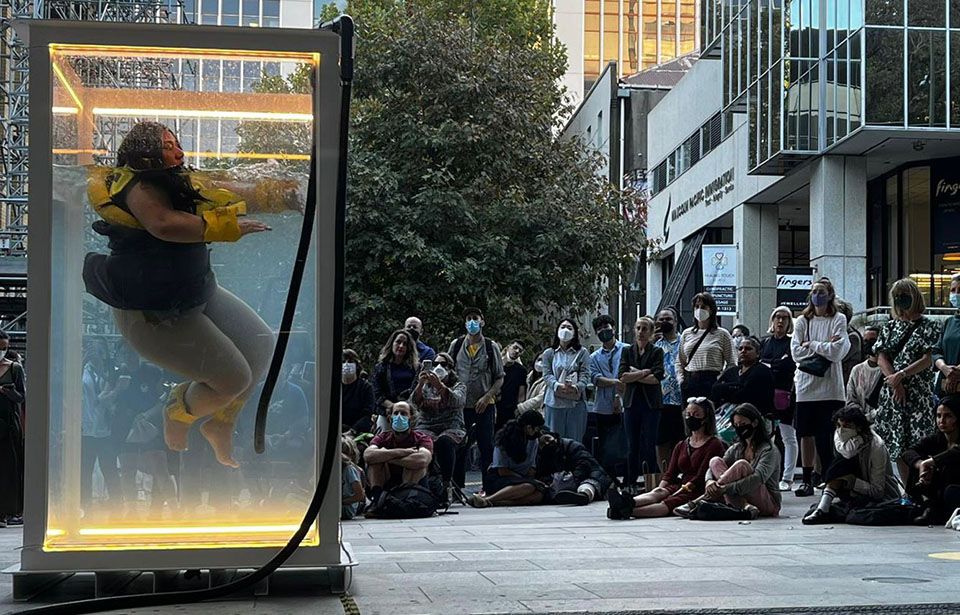 The powerful scene of a Tongan artist dancing in a see-through water tank in front of the Auckland Art Gallery caught the attention of people walking past last week.

Latai Taumoepeau danced for more than one hour while the tank was being filled with water.

The live performance, called Repatriate, is a call to action on climate change and was created to warn people about the risks of rising sea levels to Pacific Islands.

Seas are now rising twice as fast as during the 20th century, which may lead to the disappearance of entire homelands.

While the tank was being filled, Latai’s dance movements slowly became harder to execute.

The artist wore a life jacket and floatation devices around her stomach, wrists and ankles. Once the tank was full, only her head was above the water.

People gathered to see the performance on Kitchener St on Saturday, May 9.

They sat on the floor, camping chairs and inside the gallery. Georgina Griffith brought her family to watch the live performance. “This is really powerful,” she said.

The curator of the exhibition, Ane Tonga, said hoped the performance impacted the public.

“If they’re anything like me, they’ll be profoundly moved by this performance for years to come and compelled to think, act, and advocate for climate justice in their everyday lives,” said Tonga.

Latai Taumoepeau is a contemporary artist born in 1972 in Sydney, Australia.

She uses body-centred performance to tells the stories of her homeland, Tonga, and her birthplace, Sydney.

Repatriate, created in 2015, was only presented once before, on video at Carriage Works in Sydney.

The Auckland live performances are part of an exhibition called Declaration: A Pacific Feminist Agenda which is happening at the Auckland Art Gallery until the end of July.

There are 12 Pacific artists participating in the exhibition, with work work focusing on issues such as climate change, tino rangatiratanga (sovereignty), activism and social justice.

The IPCC’s Special Report on the Ocean and Cryosphere backed up Latai’s message.

It says climate change might reduce the food sources available on the Pacific Islands and access to fishing and hunting.

Losing access to these activities may generate loss of culture and negative impacts on people’s diets and marine activities.

In Fiji, for example, walls were built to prevent the sea from advancing into the Vunidogoloa village. The attempt, however, failed and the community had to be relocated.

These families are now becoming climate refugees within their own countries.