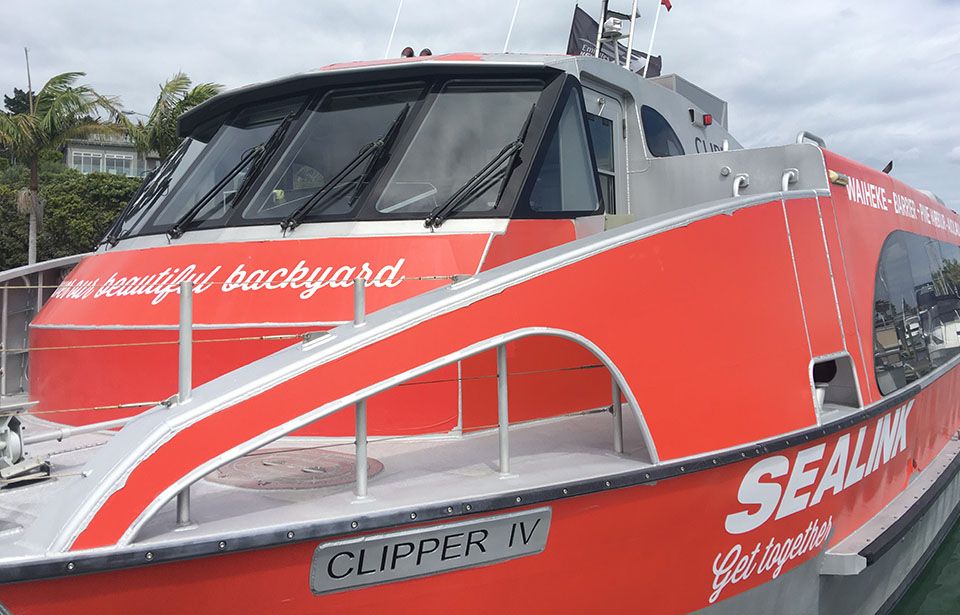 Sealink has admitted to dumping sewage in the ocean on both its Pine Harbour and Great Barrier Island routes. Photo: Rene Ryall

Regulations allowing ferries and other vessels to dump sewage in New Zealand oceans are outdated, says the National spokesperson for the environment, Scott Simpson.

The regulations, passed in 1998, allow untreated sewage to be disposed 500m from land.

Treated sewage can be disposed of anywhere, except within 100m or 500m of a marine farm, depending on the grade of the sewage.

Ferry company Sealink has admitted to dumping sewage on both its Pine Harbour and Great Barrier Island runs.

“Our commuter ferries operating out of Pine Harbour report very little usage of our toilets on board,” says Sealink chief executive Steve Chapman.

Te Waha Nui understands each of Sealink’s Pine Harbour vessels empties its tanks into the ocean twice a day.

Sealink says it is investigating how much sewage its Great Barrier Island ferry, Island Navigator, is releasing into the Colville channel.

Mr Chapman says they may consider modifications to its tank capacity to allow sewage to be pumped ashore if the findings are significant.

"I would think that as responsible corporate citizens, commercial ferry operators should just take a more proactive and responsible line,” says Mr Simpson.

Passenger ferry company Fullers says it is committed to a policy of zero waste disposal at sea.

Mr Simpson says commercial ferry companies have a moral obligation to protect the environment within which they operate and profit from.

He says the regulations are simply not acceptable today, and regulations allowing sewage dumping in the ocean are “out of sight out of mind".

“We’ve had a number of situations just recently where in Wellington and in Auckland, raw sewage has been allowed to flow into the harbours.

"It just seems to me to be unacceptable in today’s day and age that we allow commercial ferry operators close in, to do that."

Mr Simpson says he suspects passengers would be unaware of what is happening, and it “goes without saying” ferry companies should have to provide the necessary facilities to pump ashore.

Green MP Eugenie Sage did not comment as to whether she thought the current regulations are acceptable.

She says the fact marine pollution regulations exist shows the issue is not out of sight, out of mind, although “there is always an opportunity to improve”.

However, Mr Simpson says there has been "very little action" from the Government on the issue.

"They talk a big game but they do very little,” says Mr Simpson.

Ms Sage says government focus has been on freshwater management in recent years, and there “may not have had the capacity to review the marine pollution regulations".

Darleen Tana Hoff-Nielsen from Mauri o te Moana, a collective working to lift the mauri of NZ oceans, says the state of the environment report on the Hauraki Gulf is “quite damming".

“It talks about species being functionally extinct. It talks about the life supporting capacity of ecosystems there being absolutely degraded. So its a horrendous story in the Hauraki Gulf,” says Ms Hoff-Nielsen.

“They have holding capacity on those ferries. So just don’t dump it,” she says.