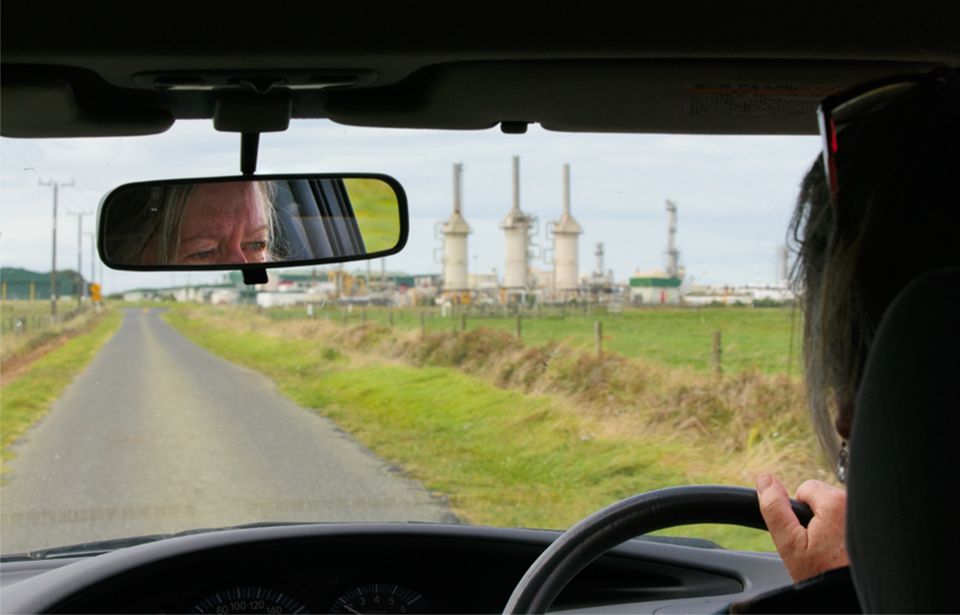 A new type of tour is available in Taranaki. Image: supplied.

A new kind of tour is running in Taranaki, but instead of taking visitors to the region's idyllic hotspots, teacher and activist Sarah Roberts takes groups through its rural heartland to expose the devastating effects of on-shore oil and gas exploration.

Taking in actual fireballs and dystopian-looking fracking machinery, this new kind of tour depicts a stark contrast to most of the country’s clean-green image, but it’s a harsh reality that filmmaker Ethan Alderson-Hughes is intent on sharing.

“Time is almost up to solve the climate crisis, yet the Government and industry continue to uphold our fossil-fuelled society, placing profits over the health of the planet, and its people. Nowhere in our country is this more represented than in Taranaki."

Alderson-Hughes and his team take a fly-on-the-wall approach for their short documentary A Fracking Tour of Taranaki, a collaborative project that’s part of the Someday Stories 2021 Series 5 collection, six short films on sustainability by emerging young filmmakers from Aotearoa New Zealand.

“I was told about these tours that Sarah was running. I thought it was a unique type of 'tourist attraction' and wanted to check it out myself.

“She had such a wealth of knowledge, with lots of passion and fight in her that’s hard not to be drawn into.”

Alderson-Hughes and his team also interviewed workers, businessmen and residents, getting a wide mix of opinions on the subject.

“We found we got very different responses from district to district and person to person. Some people had absolutely no idea that fracking was even happening in their community."

Others involved in the oil and gas sector were “sometimes defensive” around their industry while some agreed with the need for change.

He says in some communities, particularly in the frack-free settlement of Parihaka, there a strong sense of grassroots activism, one he hopes will help pave the way for further indigenous leadership around these issues.

“Through their mahi and campaigning, they were able to shut oil and gas exploration out of their whenua and I think there is a lot we can learn from this.”

After editing the film, he felt “somewhat nihilistic and hopeless”, but this in itself emphasised the need for action and change and the hope that brings with it.

“I want people to know this is what it looks like, because the film was sparked out of my own ignorance towards it.

“We should start to think about general decolonisation for the sake of the climate and for our own societal wellbeing. We’ve got a long way to go and I want people to start drawing the connection that oil and gas is just continuation of colonisation.

“If we change the way society works, maybe we can get out of this mess.”

A Fracking Tour of Taranaki premieres on September 20. You can watch it online through Radio New Zealand, Stuff and Māori TV’s online platforms and see more about it on Facebook and Instagram.