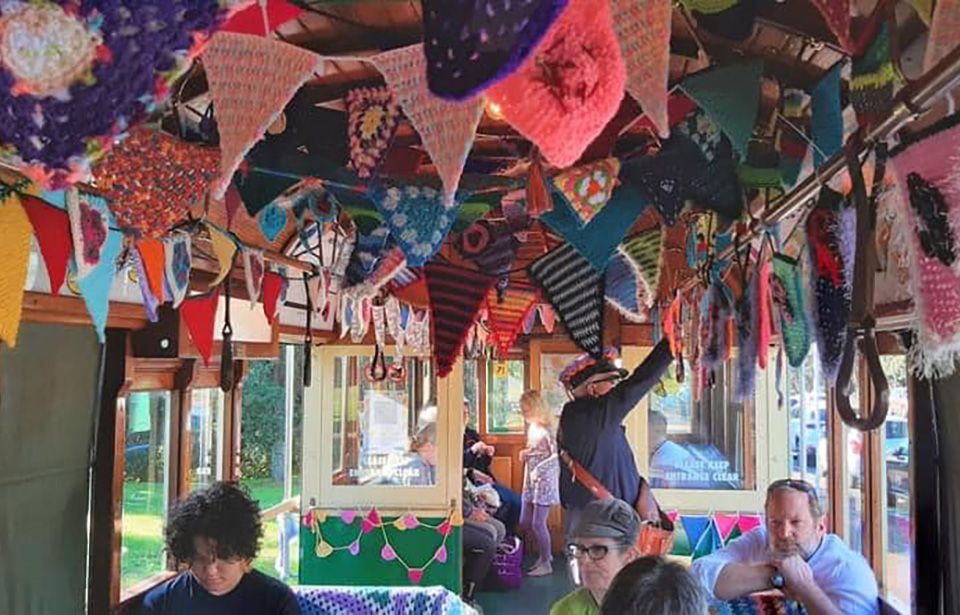 Motat's tram was all dressed up with somewhere to go. Photo: Toby Simson

After "thousands" of hours' work, Motat's tram was all dressed up in knitting and crochet as part of a recent  global celebration of the craft of knitting.

Sue Elliot, organiser of the event at the Muesum of Transport and Technology, said 150 people were involved in the knitting or the decoration of the public tram.

The event was one of five in New Zealand that were part of World-Wide Knitting in Public Day, which happens on the second Saturday of June every year.

This year there were 175  events took place in 18 different countries.

Ms Elliot said it was initially about "surprising people" with knitting in unexpected places.

"People show off their knitting and crochet, take it outside, countering the idea that knitting is sort of solitary, domestic, indoors.’’

Ms Elliot said she was inspired to decorate the Motat tram after seeing a tram decorated by a Christchurch entry.

She said believed knitting had been making a resurgence in the past few years.

"Knitting and crotching are almost the antithesis of the hard edge of [today's] technology," she said.

"[You've] got two stitches, a knit stitch and a pearl stitch, so it’s a sort of binary code."

Ms Elliot said knitting could also be a form of resistance.

‘’When Trump was inaugurated, the day after there were those international marches in support of women's rights.’’

Women wore knitted ‘’pussy hats", pink hats, that were a reference to his misogynistic comments.

Ravelry, an online knitting community with eight million members, banned any support of Donald Trump on the site.

This created a ripple effect online with posts like ‘’I stand with Ravelry’’ and ‘’Make America Knit Again".

"Knitting and crochet has always been used as a form of resistance but it’s also a celebration of our art and our craft and to have fun."