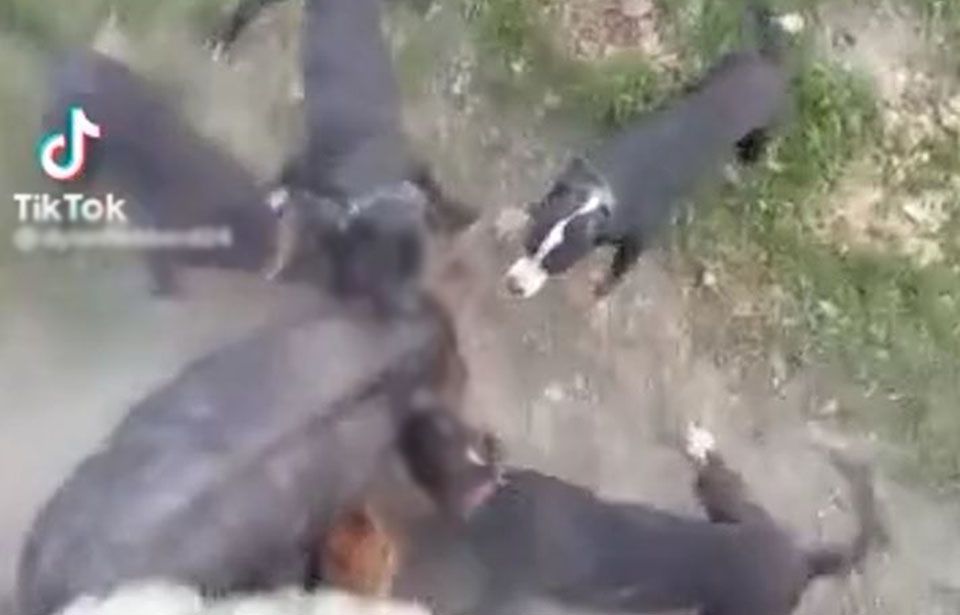 A New Zealand pig hunter filmed his dogs as they mauled a boar. Image: screenshot

WARNING: This story describes cruelty to an animal.

The hunter can be heard chanting encouragements as three of his dogs latch onto the pig’s face.

At the end of the video, the boar becomes stuck in place by the increasing number of dogs sinking their teeth into its body.

The hunter walks over and appears to slap the pig’s haunch. The pig tries to kick back and groans in pain.

“This is considered normal pig-hunting practice and I would question why we should consider any of this normal,” he said.

But New Zealand Pig Hunting Association spokesperson Geoffrey Fitzgerald said the behaviour in the video was not normal.

He described the video as “disgusting” and said there was “no tolerance” for inhumane behaviour in the pig-hunting community.

Fitzgerald said “a quick, humane kill is the only way" and anyone who found to act otherwise would be thrown out of the association.

Ill-treatment of wild animals is an offence under the Animal Welfare Act 1999, but a defence can be made if the alleged conduct is considered generally accepted hunting practice.

The New Zealand Pig Hunting Association said it would be willing to testify in court the actions of the hunter in the video were not generally accepted hunting practice.

The SPCA confirmed to TWN it was investigating the video and could not comment publicly on it.

It directed TWN to statements on its website that said the SPCA opposed the hunting of animals purely for the entertainment of people.

Another statement said the SPCA opposed the "hunting of animals with dogs because of the negative impacts to the welfare of both the hunted animal and the dogs”.

SAFE New Zealand is calling for a complete ban on pig hunting, or at the very least the banning of using dogs.

“It’s cruel to the pigs, undeniably they suffer, and it’s dangerous for the dogs as well,” said Appelbe.

Fitzgerald said the person in the video did not represent pig hunters in New Zealand.

Banning pig hunting entirely would be bad for the environment, but he wanted more regulation in place to prevent hunters acting inappropriately.

“Pig hunters do a great job of controlling pig numbers in New Zealand,” he said.

TWN chose to not hyperlink this story to the TikTok.

LISTEN: More on the story and from our interviews.