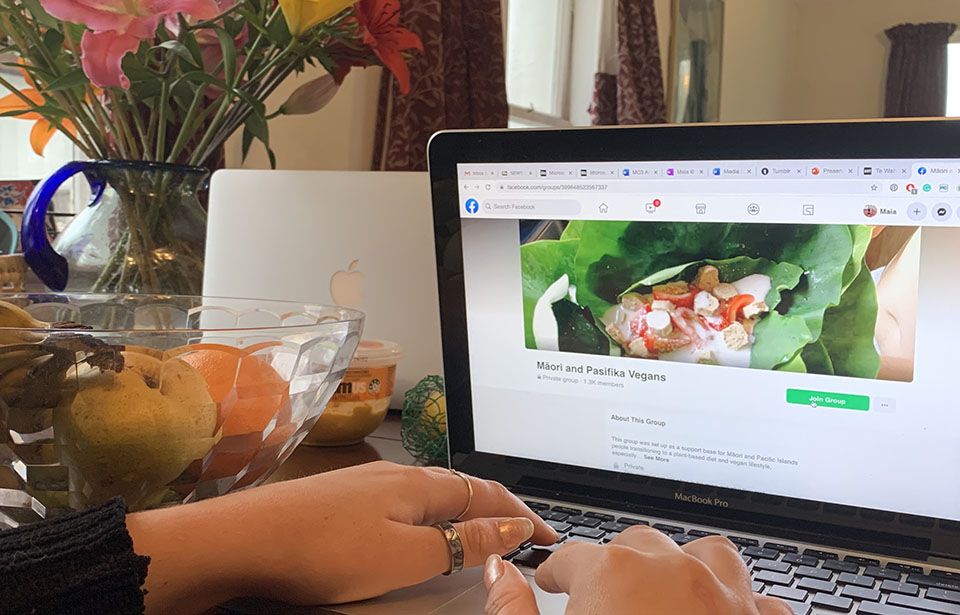 A moderator of Maori and Pacifica Vegans says racism in Aotearoa is visible in the way people behave on Facebook, which is why their group was started. Image: Larissa Howie

Admin of Māori and Pacifica Vegans on Facebook Jasmine Taankink says they started the group because they were being “left out of the conversation”.

Ms Taankink, who is Taranaki Iwi, Ngāti Porou and Pākehā, said moderators of any activist groups should have a good understanding of how colonisation has impacted Indigenous people.

She said admins have the power when it comes to moderating posts so they need to have a understand what different people in the group are experiencing.

“They need to have a good analysis of colonisation, of its impacts on people on Aotearoa, of tagata Pacifica, and a base knowledge of Te Tiriti o Waitangi,” she said.

Ms Taankink said despite being vegan, some Māori encounter issues Pākehā vegans are not aware of, such as feeling disrespectful when turning down non-vegan food at the Marae.

“When someone offers you food, that's them showing manaakitanga and you should eat that food.

“So, to ask those sort of questions are really valid and they need to be asked,” she said.

When this concern has been raised though posts on vegan Facebook groups, they are often met with distainful responses in the comments, said Ms Taankink.

She said New Zealand is not immune to racism with Māori and Pacifica bearing the brunt of a lot of direct racism on Facebook.

The angry knee-jerk reactions from some members of mainstream groups meant Ms Taankink and her co-admin felt a need for a safe space where Māori, Pacifica as well as other Indigenous and people of colour could discuss these issues.

She said some people get upset when they discover the group exists, and they need to accept it is okay for the space to exist outside mainstream groups.

“Parts of racism is not acknowledging people's experiences, not making space for other people's stories, not caring about humans, which is the main issue I see with mainstream vegan groups whether they're online or offline.”

She said she wants to hear what is wrong with the group so they can actively work to make changes.

“I'm here with an open heart open mind, I want to hear their criticisms,” she said.

Ms Denise, who is Australian Aboriginal (Koori), said views of Indigenous people are sometimes drowned out by a large volume of Pākehā who respond with defensiveness to different vegan perspectives.

“One of the challenges as admins that we encounter is some fragility, some defensiveness, and some sensitivity”, she said.

She says the admin team who moderate Auckland Vegans will be attending a webinar held by Action Station to ensure Māori and Pacifica members are advocated for positively.

She is also hoping to increase and diversify their admin pool so more Indigenous voices have space to be heard.

Spokesperson for the Vegan Society Aotearoa Claire Insley told Te Waha Nui she recommends everyone takes the time to explore their own racial bias, and group admins should certainly get training.

“The Vegan Society Aotearoa is here for all vegans and unfortunately the vegan community is often at war with different viewpoints amongst the community. We fully believe our community needs to be more inclusive,” she said.

“Open your ears and listen,” is her advice.