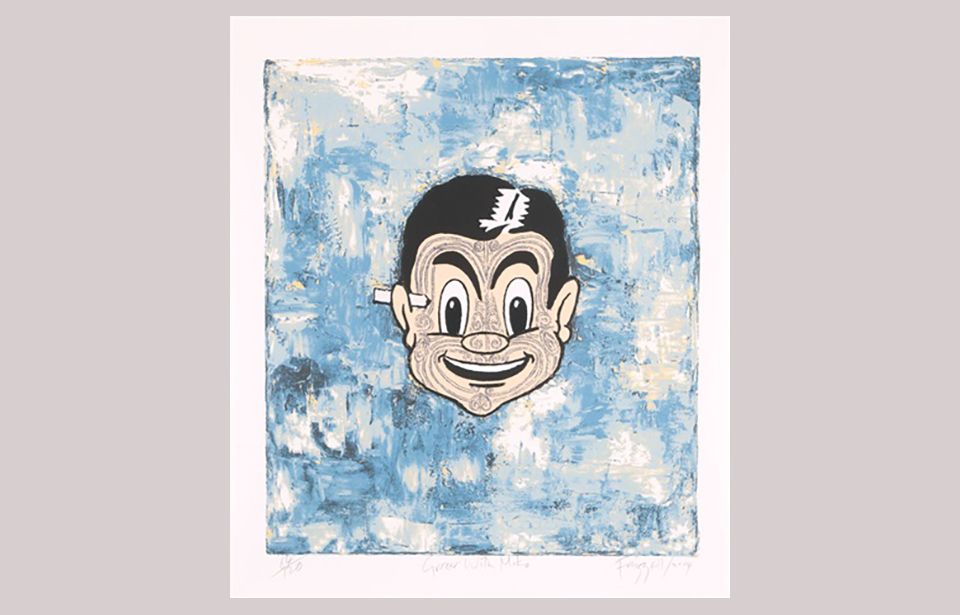 The wave of offence taken at Dick Frizzell’s "Grocer with a Moko" might have grown over the years but it hasn’t engulfed the iconic Kiwi painter.

This year marks 30 years since the controversial painting was crafted, and Frizzell is still proud of the artwork.

Back then, Māori were starting to openly oppose European businesses exploiting their culture, he said.

“There was no court order [to stop it]. There was just a bluff. Get rid of this or you’ll be a bad person.”

‘Grocer with a Moko’ depicts the Four-Square Man with tā moko, a sacred expression of whakapapa in te ao Māori.

The painting was part of Frizzell’s Tiki exhibition that aimed to “stir the pot”, he said.

Frizzell said he was kicking back against those who decided Europeans couldn’t use Māori culture.

‘Grocer with a Moko’ replicas can still be bought from Frizzell's website, and range in price from $49 to $3,950.

Frizzell estimated the original was now worth more than $100,000.

The painting represented a “merging” of European and Māori cultures and he described offence being taken as “patronising”.

“[Māori] are allowed to come and take European art forms because they’re the minority culture, but we aren’t allowed to come in [the other] way because we’re the dominant culture?

“You can’t resist it. You can’t stop a leaking back and forward. It’s part of your landscape.”

However, Māori cultural advisor Dr Karaitiana Taiuru said the painting “looks worse the more I look at it".

Dr Taiuru said tā moko was deeply sacred to Māori. Each tā moko was unique because it was inspired by a significant life event or story of the person receiving the tattoo.

He said only people who have Māori whakapapa were entitled to receive tā moko.

Frizzell confirmed to TWN the Four-Square Man was not meant to be Māori, and there was no story behind the moko.

He said he “invented a generic moko”.

Dr Taiuru called for a review of the Copyright Act and Aotearoa New Zealand's intellectual-property laws to give Māori cultural property legal standing.

“All indigenous people around the world don’t have legal rights to their own culture," he said.

“In a Western perspective, you either individually own something, or a company or a trust owns something, not a group of people from the same family.”

Dr Taiuru has advised on cultural intellectual-property rights for more than 10 years and sits on the Māori Advisory Committee for the Intellectual Property Office of New Zealand.

In 2011, the artistic duo of Otis Frizzell (Dick Frizzell’s son) and Mike Weston produced “Grocer with Moko Erased", described as a “typically  witty and challenging” response to Frizzell’s 1992 picture on the pair's website.