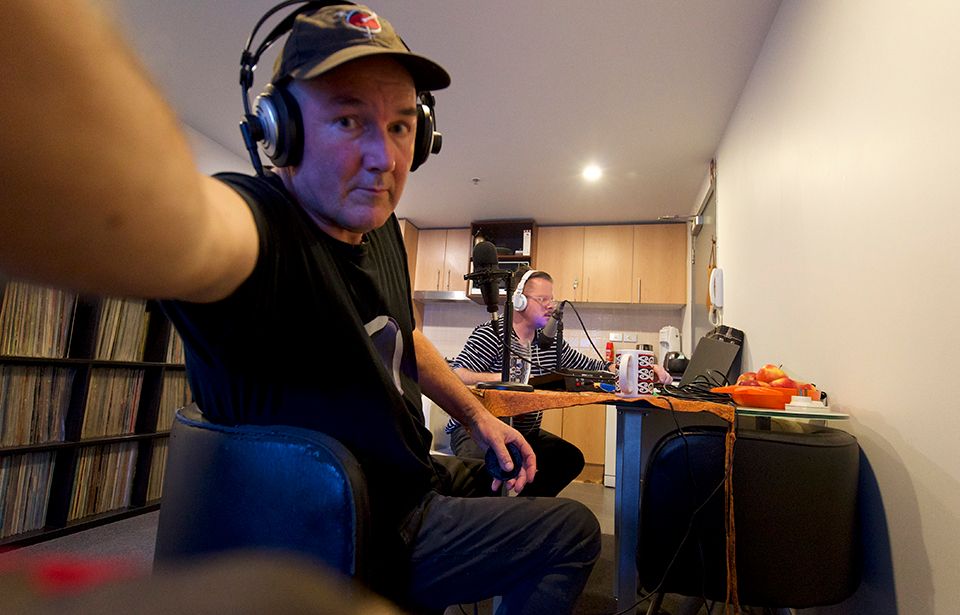 Dr Lewis Tennant (at back) and a guest on his podcast, Jed Town, record an episode of Dr Tennant’s Verbal Highs. Photo: supplied

Kiwi podcasters will be soon honoured for their contributions to their growing industry with the launch of the NZ Podcast Awards.

The inaugural awards, launched this month, have been set up to recognise remarkable work done by producers across the country and abroad.

Podcasting is growing at a fast rate in New Zealand, with podcasts reaching 12 per cent of New Zealanders in 2020, up five per cent from 2018.

Co-founder of the awards Richard North says, in light of this growth, it seems only right podcasting should have its own industry awards.

From large publisher and radio networks through to emerging independent podcasts, the awards aim to cover the entire podcasting industry in New Zealand.

Dr Lewis Tennant, a communication-studies lecturer at AUT and producer of Dr Tennant’s Verbal Highs podcast, says it has taken a while for podcasting to reach a big audience and there is still a lot of room for growth.

“With the unprecedented popularity of podcasts like Serial we have seen a lot more people engage with podcasts. Even if they are not a regular listener, they have at least checked out one or two programmes.

“However, the numbers of people engaging with podcasts are nowhere near those of more entrenched forms of media,” says Dr Tennant.

Podcasts offer listeners an accessible and refreshing way of learning about the world around them, he says.

“A lot of our modern media environment involves having to look at a device. A lot of people get screen burn out.

“Podcasts are a way for you to engage in media and storytelling without having to be tethered to a screen. You can walk and cook and engage with the outside world while listening to a podcast.”

“For a lot of people podcasts are a mode of respite. Quite often our media can be quite negative, whether it be people commenting, nastiness on news threads, graphic videos.

“In general, there is a feeling podcasting and podcasters are people doing positive stuff.”

In regards to his own podcast, which features long-form interviews with people in arts and media, Dr Tennant has found the experience fun and rewarding.

“I love having a passion project that ticks along. Because there is so much out there, the trick is trying to be heard amongst everything else.”

“Awards are a validation of a community of people, many of whom are producing and telling great stories, which are often untold and local, for no financial return.”

The NZ Podcast Awards, which will be an annual event, has been launched with 12 categories, including a Listeners’ Choice award.

Judging will be by a line-up of digital media industry leaders from New Zealand and around the world.

Nominations from the public and podcast producers are open until tomorrow (September 1).

Voting for the Listener’s Choice Award will open on October 7 and all winners will be announced on November 7.