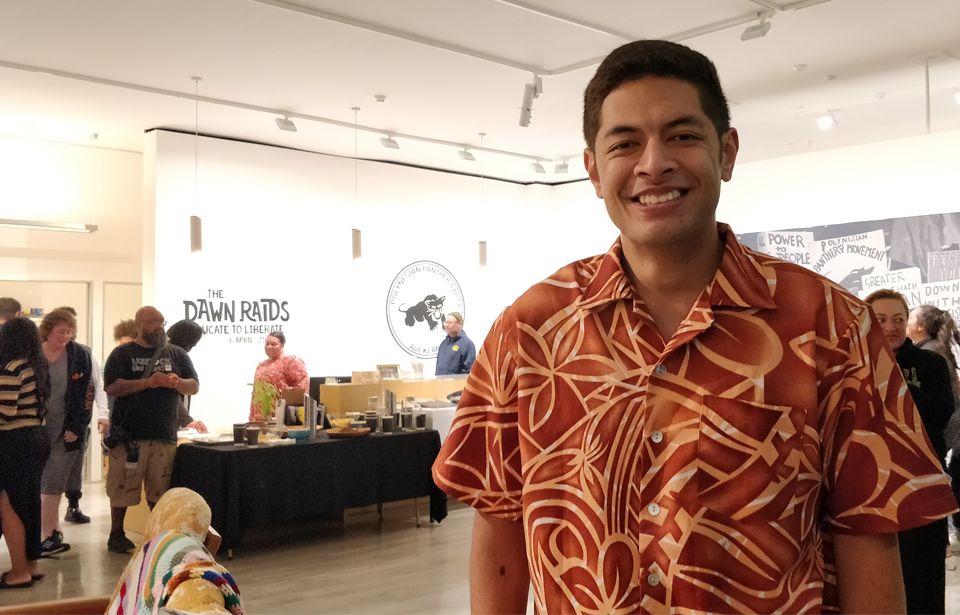 Spoken word artist Eric Soakai, 21, performs his poem They Will Remember Our Names – a celebration of Pacific people’s tenacity – at a Dawn Raid exhibition at the Fresh Gallery Ōtara. Photo: Irra Lee

Pacific stories spanning generations are emerging through film and poetry at a South Auckland art exhibition about the Dawn Raids.

The Educate to Liberate exhibit at the Fresh Gallery Ōtara, which opened in April, features photographs, artwork and Polynesian Panther memorabilia from the 1970s Dawn Raid era.

Filmmaker Robert George, alongside curator Pauline Smith, offered people affected by the raids a chance to tell their stories.

The Dawn Raids saw police and immigration officials target the homes of Polynesian immigrants in the early hours of the morning in a government crackdown on alleged ‘overstaying’.

“What I’ve seen [the exhibition] do is bring out people’s own experiences of the Dawn Raids.

“Often, when those stories emerge, it’s the first time they’ve ever been told.

“The people who tell them often find the telling of it very healing,” Mr Toleafoa said.

A week into the exhibition, the next generation of Pasifika also raised their voices through spoken word poetry.

Spoken word artist Eric Soakai, 21, said he was inspired to write his poem after he learnt about the racial injustices against Pacific Islanders during the Dawn Raids.

Mr Soakai said his poem They Will Remember Our Names — an “an ode to those who disrupt spaces” — started from a place of anger before it became a piece celebrating Polynesian people’s resolve.

“To perform it in a space that honours those who held it down in a political sense…it really brought a warmth to my heart,” he said.

Sixteen-year-old Aigagalefili Fepulea'i-Tapua'i, a fellow spoken word artist, said she wrote her poem 275 Love Letters to Southside — which reflected on what it meant to live in South Auckland — after she learnt about the Dawn Raids at school.

“I think the Dawn Raids had a very dramatic effect on all of the Pacific Islander community.

“I feel like it’s something that the newer generation or my generation take for granted when it comes to the Polynesian Panthers and how hard they fought for rights that we have now,” she said.

Despite this progress, Miss Fepulea'i-Tapua'i’s said there was still work to be done to make sure Pacific viewpoints were represented in issues that affected them. She said spoken word poetry provided a good medium to encourage that voice.

“[As young Pacific Islanders], we’re always hearing that Islanders weren’t smart enough to be able to tell their own stories.

“If kids are hearing that all the time, they’ll start to believe it and they’ll start to limit themselves. So, I think it all starts with encouraging our youth,” said Miss Fepulea'i-Tapua'i.

The Dawn Raids — Educate to Liberate exhibition is showing at the Fresh Gallery Ōtara until May 25.