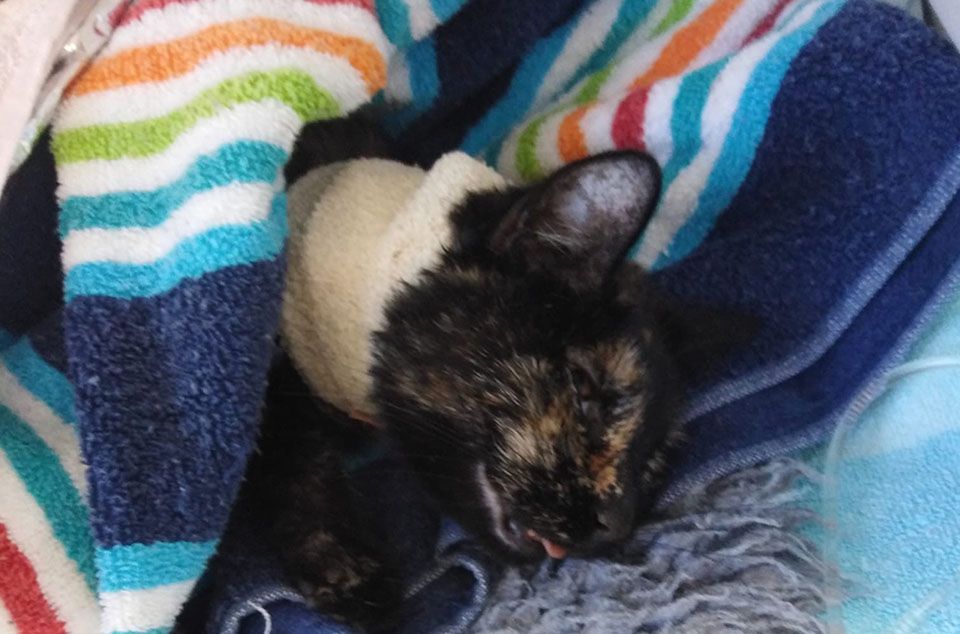 BOW FIGHTING FOR HER LIFE AFTER BEING SHOT IN THE FACE. PHOTO SUPPLIED BY JAYNE DREVER.

A Whangarei feline has had a narrow escape after being shot in the face.

Jayne Drever found her cat Bow covered in blood in her Maunu home.

She went missing on April 22 when she was last seen at 2 pm around the Maunu area. Bow was then found at 1 am last Tuesday with a shattered jaw and blood loss from a gunshot wound.

Vets were worried for Bow as she had lost more than half of her blood.

“Fragments of the bullets were still lodged in her body,” said Jayne Drever, Bow’s owner.

Ms Drever said the vets initially thought Bow had been struck by a car.

She said they believe the shooting occurred the same evening Bow went missing. However, they cannot determine the exact time Bow was shot.

After Ms Drever found out Bow had been shot, she said she felt “sick”.

“It feels horrible knowing that someone purposely shot my baby, she’s not even two-years-old.”

Bow is now recovering safely at home, but her owner said she worries for her safety and other cats’ safety as well.

“To know that there is someone in my area shooting up people’s animals makes me feel sick and makes me want to move my life somewhere else,” she said.

Natasha Wilkins, who also lives in Maunu, experienced a similar situation after her cat, Fred, was shot with a pellet gun in 2013.

She said multiple cats had been killed in Maunu at the time, and police never found who was responsible.

As a result of the shooting, Fred had one of his front legs amputated.

In a statement, a police spokesperson said they "recognise the distress caused to pet owners when incidents like this happen and would encourage anyone who experiences an incident of this nature to report it so appropriate action can be taken".

Under the Animal Welfare Act, someone who ill-treats an animal can receive three years imprisonment, a fine up to $75,000, or both. This depends on if the animal is permanently disabled, dies, or if the animal is seriously injured.

However, harming another person’s animal may come under the s269(2)(b) of the Crimes Act 1961, which prohibits “intentionally or recklessly” destroying or damaging the property of another person. A conviction carries imprisonment of up to seven years.