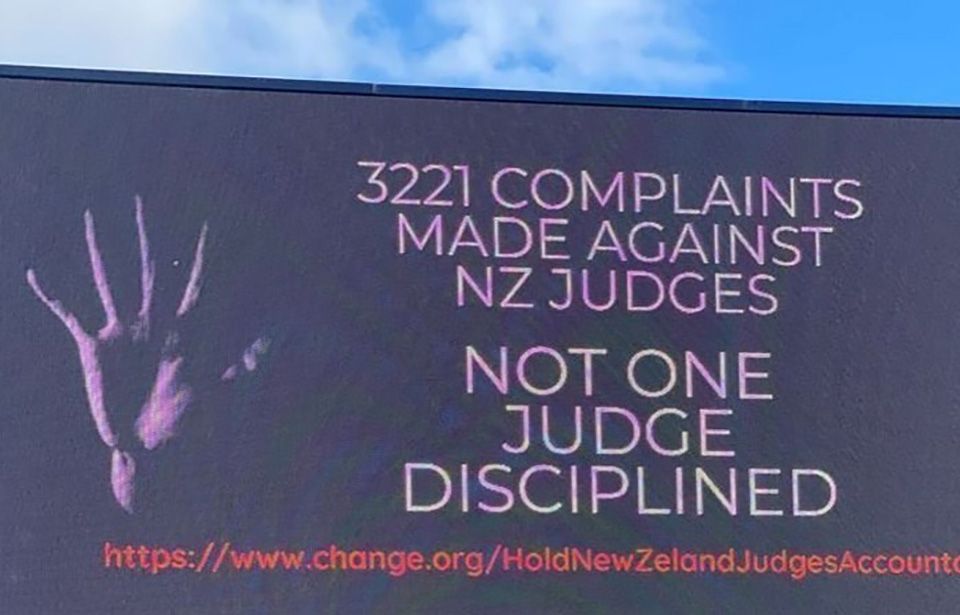 A billboard promoting the petition in Auckland. Photo: Lucy Wormald

New Zealand is failing to hold incompetent or dishonest judges accountable, according to a new petition to be sent to the United Nations High Commissioner for Human Rights.

The organiser of the petition, a woman with involvement in the New Zealand legal system over 30 years, says new laws must be passed to enable discipline for judicial misconduct.

“It’s atrocious. Judges have immense power but there is no way to hold them accountable because we simply do not have the laws in the New Zealand to do it, ” she says.

The woman cannot be named for legal reasons.

In 2000, the United Nations Committee on Human Rights report denounced New Zealand’s lack of oversight of the judiciary, with the UN special rapporteur expressing "shock and surprise" over a lack of procedures for disciplining judges.

However, the petitioner says the legislation was deceptive because it made no provision for any formal disciplining of judges.

Instead, the act provides for an assessment of complaints about judges and a process for the removal of judges in office.

“The introduction of the JCC made everybody believe this is where you go to complain about a judge.

Figures from the JCC’s own reports, which cover all New Zealand courts, show that more than 3200 complaints have been filed since 2005.

However, formal discipline was only twice recommended and no instances of disciplinary action has ever been taken.

“At the end of the day we have this act which is toothless. The whole act is about removing a judge, not disciplining them.

“The process to remove a judge is so difficult and has never happened in New Zealand,” says the petitioner.

Professor Andrew Geddis,  of the University of Otago’s Faculty of Law, says the JCC does consider complaints against judges.

However, there is a real gap between the only formal disciplinary measure – sacking from office – and the sorts of actions most complaints relate to, he says.

A complaint may be passed on to the Head of Bench, the top judge in the relevant courts, he says.

“The Head of Bench may then impose some sort of administrative sanctions or requirements on the judge as a form of discipline, but there is no capacity to punish them formally.”

Such issues are “handled behind closed doors through the Head of Bench’s actions”, says Professor Geddis

“What those are, and whether they are effective, is something the public, and the person complaining, never gets to see.”

The lack of legislation may be due to concerns about creating mechanisms that can intrude on judicial independence, says Professor Geddis.

“It's the old question of, ‘Who judges the judges?’. If some individual or body has the power to fine or otherwise sanction a judge, they then get power over judges. Who should that be? And, who oversees them?”

In an effort to see these questions answered, the petitioner has spent a year writing up a document urging the UN to investigate New Zealand’s failure to bring in laws that protect citizens from judicial incompetence and dishonesty.

“The JCC has not only duped Kiwis, it has duped the UN. Twenty-one years after the UN raised concerns, we still do not have any processes in NZ to discipline our judges.”

She says she hopes the petition changes the law and our judges are held accountable.

“We cannot allow people to have such substantive power to change our lives forever without having balances and checks to keep them honest.

“It needs to be fixed for the next generation.”

The petition was launched three weeks ago and can be signed by New Zealand citizens and residents. It has had 18,000 views from around the globe and has obtained more than 1700 signatures.