Massey locals mourn one of their own at vigil 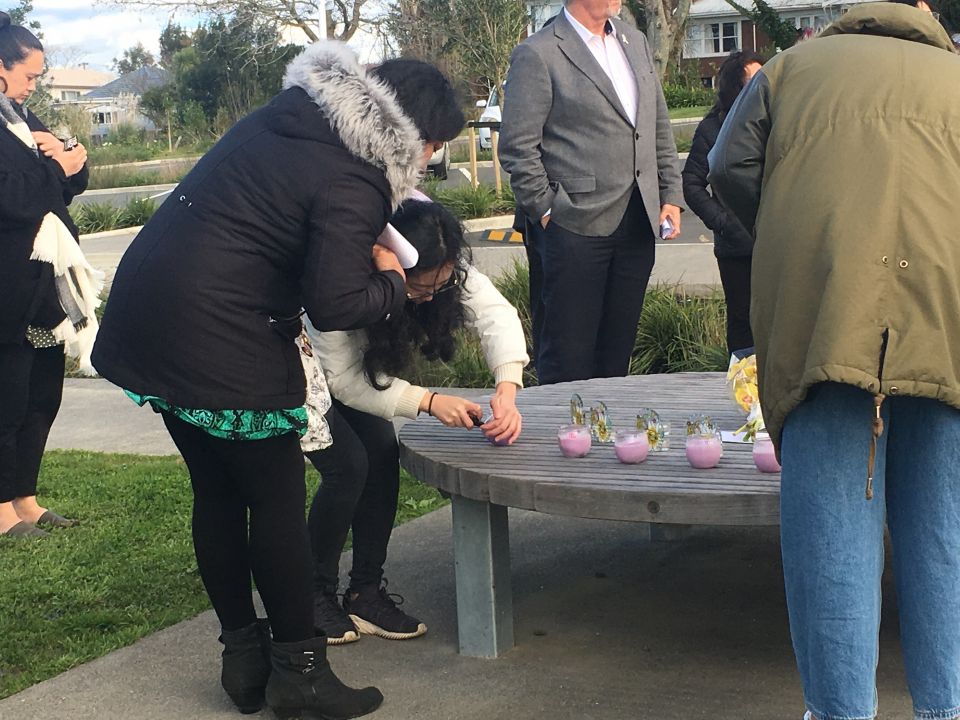 Locals light candles as they mourn the loss of a Massy neighbour who was stabbed to death in the street in July. Photo: Kim Moodie

Hunched against the bitter wind, to mourn the loss of their neighbour, dozens of residents gathered at a domestic violence vigil.

Candles struggled to stay alight on the blustery afternoon, where locals gathered in Royal Road Reserve, Massey, to pay their respects as school children played in the nearby playground.

The event this week was organised by Shakti Women’s Refuge, which provides domestic violence support to women of Asian, African and Middle Eastern Origin, in partnership with White Ribbon New Zealand, part of a global campaign led by men who condemn violence against women.

The victim was stabbed to death in the street on July 29 at 8.30am. Her son spoke at the vigil, saying his mum was in a “better place” now.

White Ribbon Ambassador Graham Zuill said he was humbled by the humility of the victim’s son.

“It’s just mind-blowing how gracious and respectful they were,” he said.

Mr Zuill said there was a sizable turnout at the event, considering it was so local.

“They all become victims. The lady who was murdered is a victim and everyone that hangs off her family and beyond, including the officers and the ambulance staff are all victims and it never goes away.”

Despite a police background, he said he was still affected by the vigil’s palpable grief.

“I’ve seen a lot. I was a detective in South Auckland and you tend to harden a little bit about stuff but I still felt it, for sure.”

Waitakere Auckland Councillor Linda Cooper, speaking at the gathering, said the sadness of this event is that it can happen in any community.

“This woman struggled for a long time to get her life back together and in our community her life ended tragically and cruelly. We put our arms around you and we hope for better.”

A man has been charged with murder and is due to appear in court for in October.

If you or someone you know is experiencing domestic violence and is of Asian, Middle Eastern or African descent, call 0800 SHAKTI (742584)