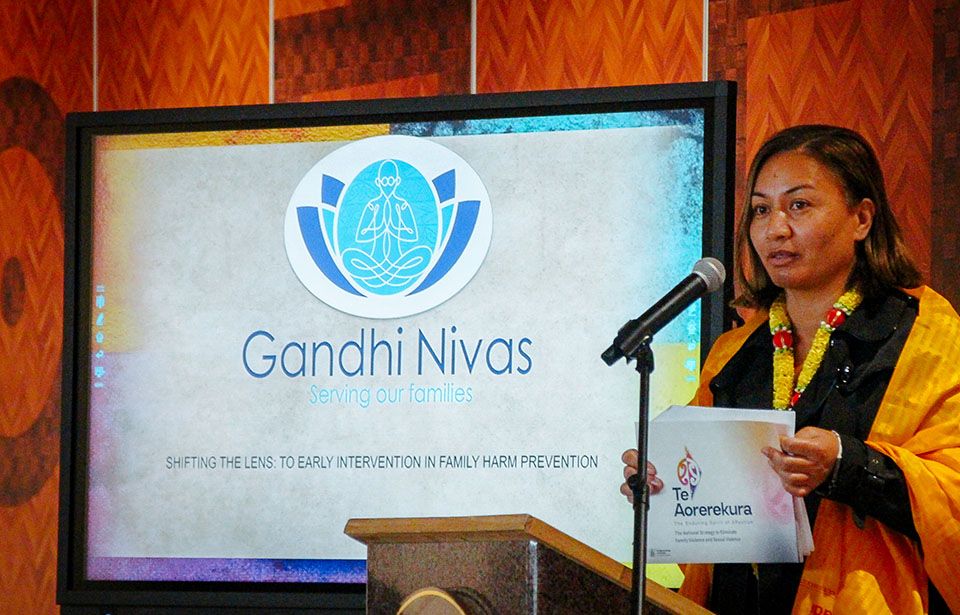 Marama Davidson, Minister for the Prevention of Family and Sexual Violence, was the keynote speaker when Gandhi Nivas hosted a hui with community leaders from around the country. Photo: supplied

An Auckland-based family violence programme that has reduced reoffending by nearly 60 per cent over five years is keen to extend its reach beyond New Zealand's largest city.

Gandhi Nivas is an innovative model that removes violent men from the family home, rather than the women and children they are abusing.

The programme is a community-lead collaborative effort in South Auckland between Counties Manukau Police, the Accident Compensation Comission, and Sahaatya.

All men referred to a Gandhi Nivas home have first been issued with a police safety order.

They are then offered free counselling, social support and emergency housing.

Gandhi Nivas operates three houses in Auckland that are staffed 24/7 by qualified professionals and has helped more than 2500 families across Auckland.

"We help men help themselves," says Ranjna Patel, the founder of Gandhi Nivas.

The programme engages offenders in their own rehabilitation and educates them about the consequences of their behaviour, and how to take responsibility for their actions and seek ongoing support.

Social workers also help the men write CVs to get them back into work or encourage them to enrol in education.

A Massey University study showed reoffending had dropped by nearly 60 per cent and the findings provide compelling proof of concept for the early-intervention model, says Patel.

"If you want to see transformational change in this country, you have to work with men who are inflicting violent behaviour in the family home," says Patel.

"It's important to support the victims of domestic violence, but that won't change a man's behaviour.

"To end violent behaviour, you've got to find and address its source."

Matthew Kean, a PhD candidate at Massey University who works closely with Gandhi Nivas, says rather than seeking a one-size-fits-all solution, the focus should be on creating "the conditions for change that these men may not get with a probation officer".

Gandhi Nivas says it has laid down the blueprint. Now the organisation wants to help community leaders outside Auckland implement similar family-violence programmes.

Around one in three New Zealand women have experienced physical and/or sexual violence, according to a study conducted by the University of Auckland.

"We can't keep having a cycle of family violence," says Superintendent Rakesh Naidoo, who manages community partnerships for the Police.

He says it is important to acknowledge what is working to reduce reoffending rates, rather than throwing taxpayer money at schemes that have not done much to bring them down.

"[Gandhi Nivas] is not the solution to everything. But it's definitely at the earliest stage possible where somebody asks for help."

Such programmes were a step in the right direction toward the prevention, and ideally, the elimination of family violence, he says.

Meanwhile, Gandhi Nivas hosted a hui with community leaders from around the country after the Government injected around $115 million to support the implementation of Te Aorerekura — the National Strategy to Eliminate Family Violence and Sexual Violence in its recent Budget.

"Get your kaupapa ready," said Marama Davidson, co-leader of the Green Party and Minister for the Prevention of Family and Sexual Violence, who was the keynote speaker.

"The funding is coming," she told the hui, and encouraged them to get their business leaders and service providers on board as early as possible.

She said around $38 million would go to such community-led responses to the prevention of family and sexual violence.

Gandhi Nivas recognises that its model for success is not a cookie-cutter solution for communities that each have their own challenges.

"What works in Auckland may not work in Tauranga or Central Otago", says Patel.

The key is to devolve resources to local communities to lead regional efforts, she says.

Local leaders have the knowledge and know-how about what works for their communities and are best placed to design their own bespoke family violence programmes in partnership with Gandhi Nivas, she says.