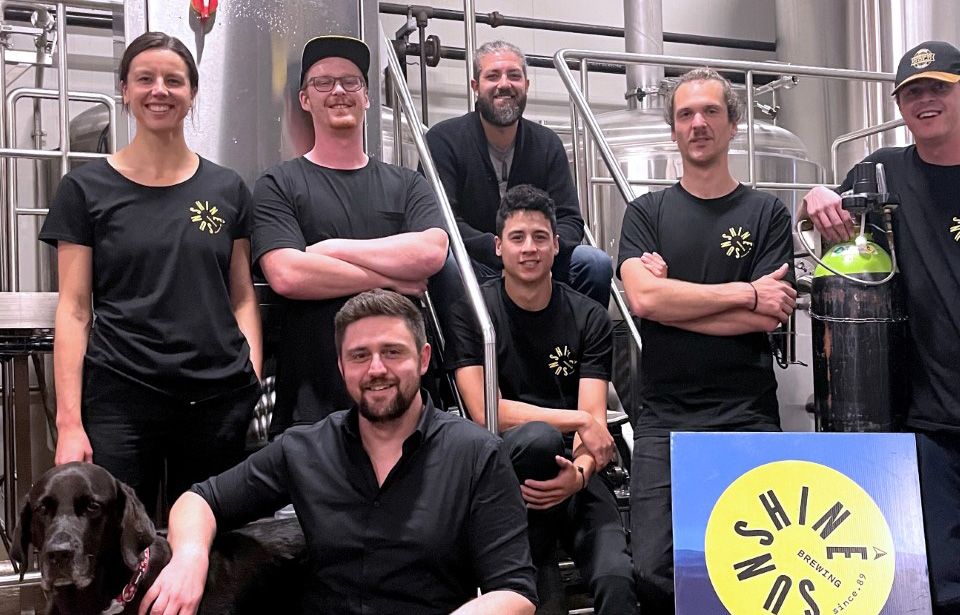 The team from Sunshine. Photo: supplied

“Gizzy hard!” went the victory call from Sunshine Brewing, one of Tairāwhiti’s secret gems, and an icon of the Coast.

After an understandable hiatus in 2020, the Australian International Beer Awards (AIBAs) were back to celebrate the world’s best small-scale craft brews, including the batch brewery from little old Tūranganui-a-kiwa.

The Melbourne-based awards hosted more than 400 breweries from across the globe at the world’s biggest, and most competitive, annual beer contest.

Craft beer has been on the up around the world, but New Zealand’s fun and often unique take on the taps sees Kiwi beer bubble to the top of the trendy market here and around the world.

Michael Donaldson, founder of the craft-beer bible Pursuit of Hoppiness, says New Zealand craft beer is world-class, but it’s the “depth of the quality” that makes Aotearoa special.

“I could name 12 to 15 breweries that are world class . . . there’s no way I would spend my discretionary dollar on a beer that isn’t from New Zealand.”

However, it was the small-but-mighty mahi of Tairāwhiti-proud Sunshine Brewing that delighted Australia’s infamous beer bellies.

Self-proclaimed as the “first beer to see the sun”, Gisborne’s boutique brewers did have the light shine on them as they hopped onto the AIBA podium a whopping 19 times.

Among their big winners were their “Stockies” hazy IPA, Pilsner, Stout and, for the more adventurous, the zesty Mexican Lager.

The Mexican Lager is a classic case of Kiwi breweries doing what Donaldson calls "magpieing" - taking beers from around the world and perfecting them in God’s Own.

“When a man of his talent lands on our doorstep, we don’t ask questions we just accept it,” says brewery director Martin Jakicevich.

Also living up to its name, the iconic Gisborne Gold Lager, affectionately dubbed Gizzy Gold, struck number one in the lager category.

A little-known fact – Gizzy Golds are the oldest craft beer still in production, sloshing its way around Aotearoa for 32 years.

The craft-beer boom is often credited to Wellington, but as New Zealand’s second-oldest (by a two-month whisker) independent craft brewers Sunshine has been a hidden treasure of Tairāwhiti since 1989.

Of its 19 entries, 18 medals sees a 95 per cent strike rate, a huge feat for the brewery that embodies the coast’s famously chill vibes.

Sunshine puts its success down to the passion of Mr Foley, saying he is "integral to their recent rise up the global beer charts.

Mr Foley has ridden the wave  of success handed down to him since landing on the coast in September 2020.

“The validation is in the consistency . . . it shows that our processes and team are focused on making a product with quality that consumers are able to depend on.”

It’s safe to say it was a big win for the small brewery.