Warm coats for those who need them this winter 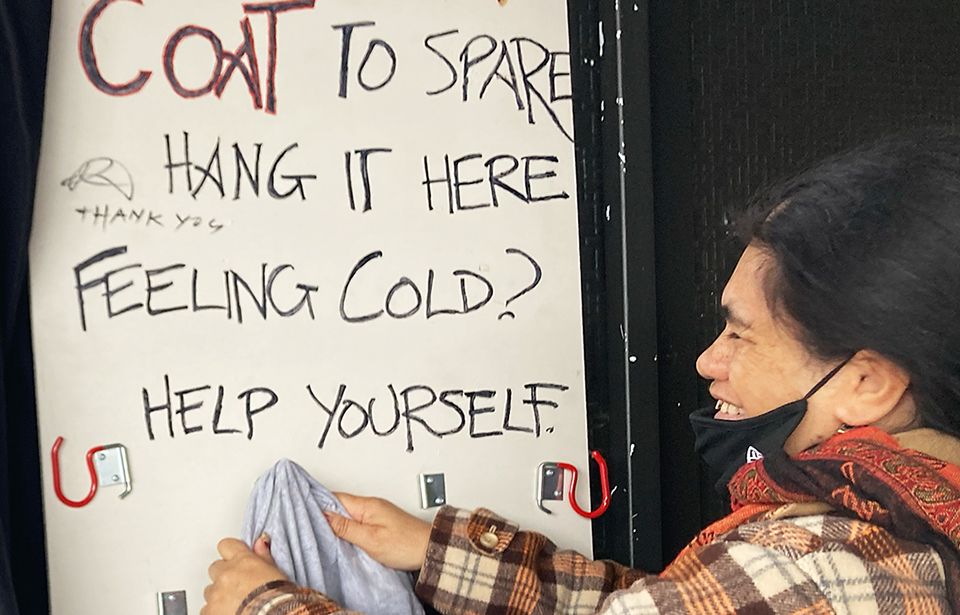 Coats are available for those who need them at K Rd's Merge Cafe. Photo: Astrid Williams

If you need a coat as winter bites in Auckland this week - or maybe you have one to spare – just head to K Rd’s Merge Café.

Merge's public coat hook started up again for the second year a couple of weeks ago, says Margaret Lewis, capability and capacity builder for Merge Community.

“As soon as stuff goes on the hooks that is warm and dry, it goes almost within minutes.

“It’s awesome there are people who want to give. It’s really bad people don’t have warm dry clothes they can wear.”

People can simply take what they need and go on their way, says Lewis.

It also means anyone with a coat to spare can just hang it on the hook as they walk past, she says.

Six, creator of the K Road Chronicle, was homeless for about six years. You need clothing for the same reason as anyone else when you are homeless, she says.

A good windbreaker might be worn for months, and having somewhere safe to store your blankets is crucial, because people can die from hypothermia if they lose their blankets, she says.

“People who need clothes usually need heaps of other stuff as well, and to get other stuff they have to go and ask somebody and they normally have to tell their story [to an official],” says Lewis.

This means people have to give up quite a lot of themselves to get what they need. It is not for anyone to decide the right or wrong reason for needing clothing, she says.

If you’re on the street for most of the day, you need warm and dry clothes in the winter or you will get sick, says Lewis.

In her experience, people would often ask Six why she was homeless.

A lot of the homeless community will talk about it being a choice, says Six.

However, she says, it also is a choice between few options.

It’s not as though you wake up one morning and are suddenly on the street. It happens slowly, says Six.

There are a number of other ways people can support Merge Community.

These can be dropped off at Merge Cafe, which is open from 7am to 2pm daily, or at Merge Community upstairs during business hours.