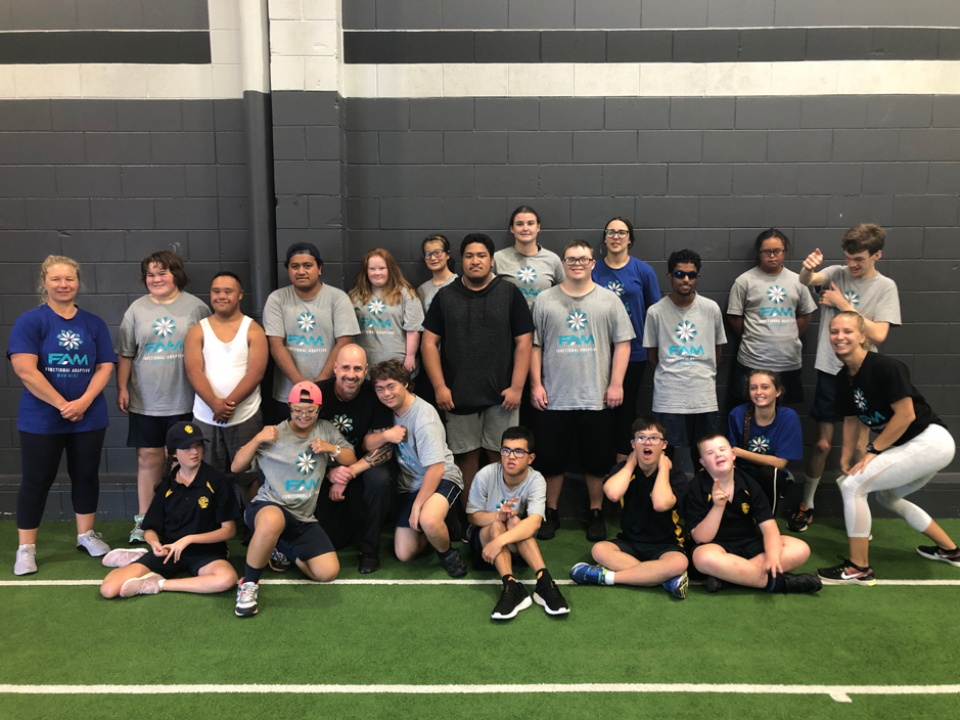 Students, volunteers and Hashtag can be seen smiling even after completing one hour of CrossFit exercises. Photo: Zoe Holland

Auckland CrossFit classes targeting athletes with differing abilities are getting inactive students moving, thanks to an instructor inspired by his own daughter.

CEO and founder of Functional Adaption Movement (FAM), Michael ‘Hastag’ Hynard has created an opportunity for differently-abled athletes to be part of the fitness craze.

Hashtag is a father of a young girl living with cerebral palsy who is the reason why he is doing this.

“I’ve always wanted to make it massively inclusive so anybody and everybody can come in and work,” says Hashtag.

“I go home and bawl my eyes out because I see something absolutely fantastic kick in.”

Every Thursday for one hour 15 students from Pakuranga College and three Marcellin College students exercise at an East Auckland gym.

‘Pegasus Unit’ teacher Sarah Williamson said her students struggle with mobility and balance, but “they are actually working on it here and they don’t realise.”

Leah Holland, learning needs co-ordinator for Marcellin College, and three of her students were invited by Ms Williamson to join their weekly class earlier in February.

“Because they [students] are mainstream it lets them be with students with the same ability and they can be supported by these same students who are older,” she said.

Year 8 Marcellin College students Tomislav Jurisich and Molly Hanrahan said they had fun, both agreeing the bike ride was the best part.

Six years ago, Hashtag was approached by a special need’s teacher asking if she could bring her differently abled students to his CrossFit class.

Hashtag says, “It was mindboggling different.”

Today, FAM classes are running out of six Auckland locations and have had requests from other major New Zealand cities.

Ms Williamson says that being able to come to a gym for the students is an amazing opportunity.

“They never not want to come.”

After their first-class Mrs Holland says her students had lots of fun.

“They were all excited and looking forward to next time.”