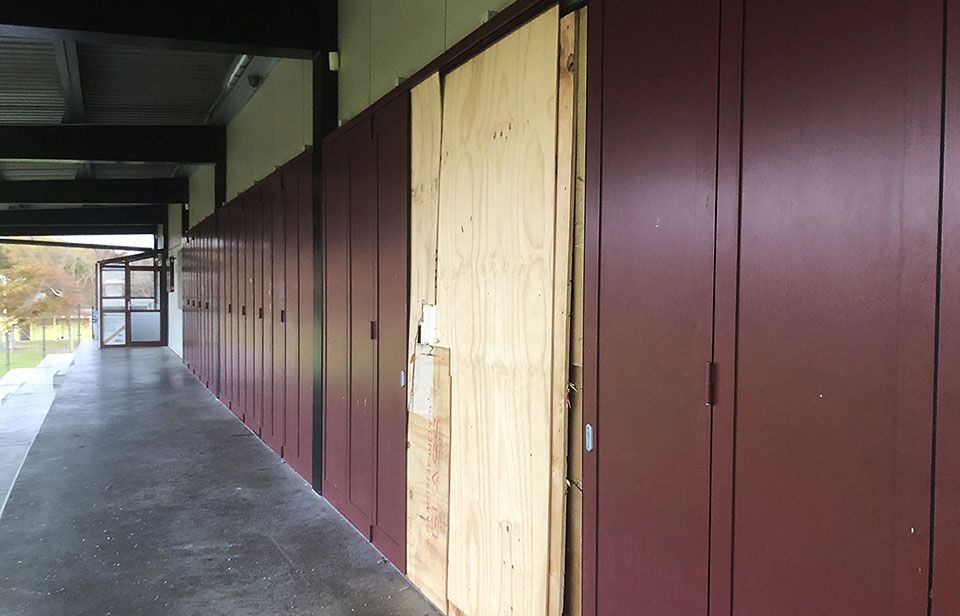 The smashed timber door, which the intruders broke through, had to be boarded up at Mangere Football Club. Photo: Thomas Day.

Thieves on Sunday hit for the third time in two months at Mangere United Football Club.

CCTV footage shows two people inside the club at 1:50am at Mangere Centre Park.

“Every time they smash a window it’s costing us $2000, so it’s basically costing us a lot of insurance” Imran said.

Imran said some of the previous offenders have been as young as 11 or 12.

“I don’t think people are taking burgulary seriously, which is the first major step to crime in NZ,” Imran said.

Police said they had received the break-in report.

“Police received a report of a break in at property on Robertson Road, Mangere East, about 10.35am on Sunday May 3. Police are looking into the matter and making enquiries.”

Police are urging anyone with information to contact them on 105.

Imran said that no police dogs as far as he knew had come to inspect the scene.

Mangere United has tried to stop offenders by barricading the doors.

However this time they broke through a timber door which was unable to be fixed due to lockdown.

Break-ins haven’t been the only form of disruption at the club.

“These people have been coming in droves and have been driving their motorbikes all over the park,” said Imran, who has been president of the club since 1993.

He believed too many people were getting away with it and the right resources were not in place.