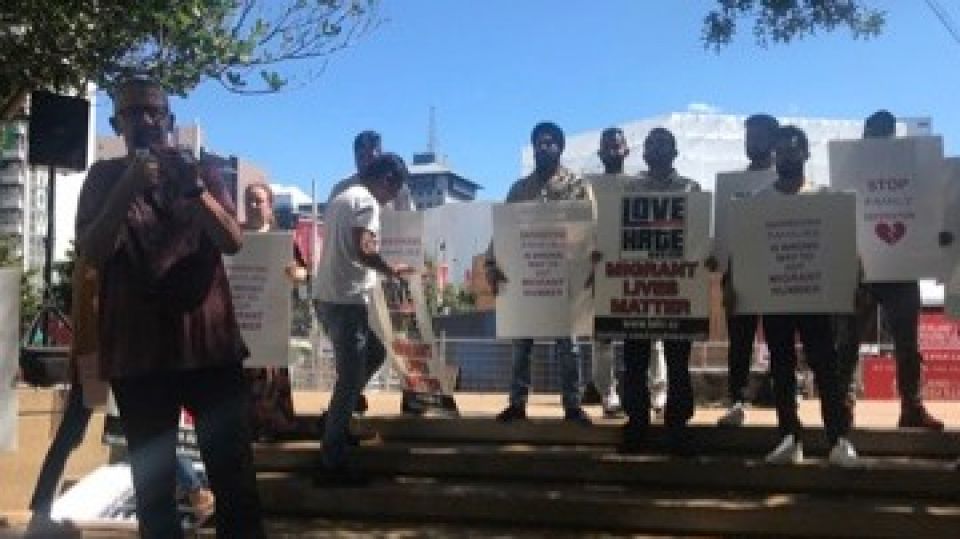 The protest in Aotea square saw Indian immigrants telling their stories about their families who can’t come over to New Zealand because of Immigration New Zealand slowing their visa processes.

“Once people come here, the rules get changed on them after they arrive and it becomes harder and harder and harder, and despite the investment of tens or hundreds of thousands of dollars, the opportunity to transition to permanent residence has been taken off [immigrants],” he said.

Anu Kaloti, spokeswoman for Migrant Workers Association of Aotearoa, translated a protestor's story lamenting how Immigration New Zealand's website shows processing times as three or five months, but visas are never processed in that time, nor are they assigned an immigration officer in that length of time.

This protester has been waiting for his family to come over and has requested a three-month visiting visa, which has not been processed.

“These people contribute to this country in more than, I would say, citizens or residents do. They most often come through the student pathway where each student pays up to $30,000 per year,” she said.

“So that is, I think, fourth largest export out of New Zealand at four to five billion dollars a year. So racists like Shaun Jones have no qualms about taking that money and yet they’re very quick to unleash racist comments.”

Joe Carolan, a Senior Organiser for Unite Union, claimed all races needed to stick together rather than fight each other.

“A year after Christchurch we still have hatred on the streets and on Facebook comments, and we know that, and it’s probably getting worse because of irresponsible politicians like Shane Jones who says that ‘you’re the problem in New Zealand’,” he says.

“That should be what we learned last year after Christchurch, is that these words from politicians who should know better have consequences.”