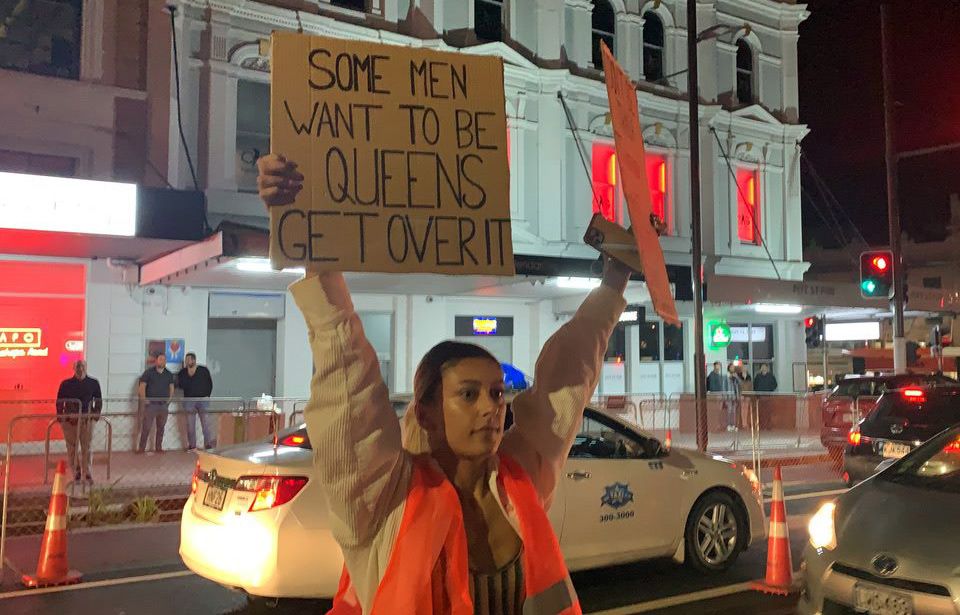 More than 400 people marched down Karangahape Rd in central Auckland on Saturday night in solidarity with minority groups within the rainbow community, who claim changes at a popular nightclub now make them feel unsafe there.

The protest was called by bar staff at G.A.Y. after a dispute with the bar’s owners, who also own neighbouring Family Bar.

The dispute led them to believe the club was no longer a safe place for trans, non-binary and queer people of colour, despite being promoted as an inclusive space.

Tensions between the bar’s owners and staff came to a head after operations manager Aaron Gordon was demoted from his management position.

Mr Gordon, also known by his drag persona as The Von Phillippe, has been credited for ensuring G.A.Y. remained a safe space for everyone who entered the bar.

“My focus at G.A.Y. was to foster a whānau atmosphere,” said Mr Gordon.

“The night the new management took over, the entire space changed. Already community members were complaining of being groped and there being anti-social behaviour by non-community members.”

On Friday, April 23, anger at these unaddressed issues by the bars owners led to a group of G.A.Y. staff walking out following a late night drag performance.

Saturday’s protest was called by the same staff members after a subsequent meeting with the bar’s owners went sour.

Mr Gordon says at this meeting several trans or non-binary members of staff were “dead-named and misgendered”; that is, referred to by the names or gender identities they no longer identify with.

Director of Auckland Pride Festival, Max Tweedie, who supported the protest, said: “It’s really important there’s spaces for trans people, for our queer people of colour to come together to celebrate who they are, to fight for progress, and to just party in safe queer spaces.

“Tonight, we’re here to make sure those spaces are returned to us and that we can continue to gather in those spaces and be safe as a community."

Moe Laga, also known as Mistress Supreme, called on the crowd to “march in solidarity with the women who have come before us” and highlighted that it was celebrated trans-women of colour, such as Carmen Rupe, who “built [K Road] into what it is today”.

Trans-rights activist Shaneel Lal called out “white gay men” for not using their position of privilege to support the trans-community.

“You want to call us your chosen family, you want to be friends. Well then wake up and pull up, because we ain’t feeling no love,” they said before leading the crowd in a chant of, “White queers wake up".

“There are plenty of white gays out tonight, but instead of standing here in solidarity with us, they are out shaking their asses at those racist, transphobic clubs.

“There would be no LGB without the T, so pay some respect,” said Mx Lal.

Attempts to contact G.A.Y.’s owners Grady Elliot and Wayne Clark were unsuccessful. However, in an RNZ interview Elliot denied the claims made against the bar.

“As far as we are concerned, we bought the place for everybody, all the gay community and nothing has changed,” he said.

Elliot said the issue around staff names stemmed from staff’s previous names being used on tax documentation, an issue that was corrected when it was brought to light. He said the community had “blown it out of proportion”.

Organisers are now calling for support to create a new space that is run by the community to ensure it remains a safe space for all.

“[The owners of G.A.Y.] have not given us a safe space, they have not treated us respect,” said protest organiser Logan Collis.

"So now we are working as a community to raise funds and to create a panel, a board of people that will work to create a night club or a night space for our community.”

By Monday evening, a Give-a-little page set up by protest organisers had raised over $2,700 towards their Safe Space Initiative.