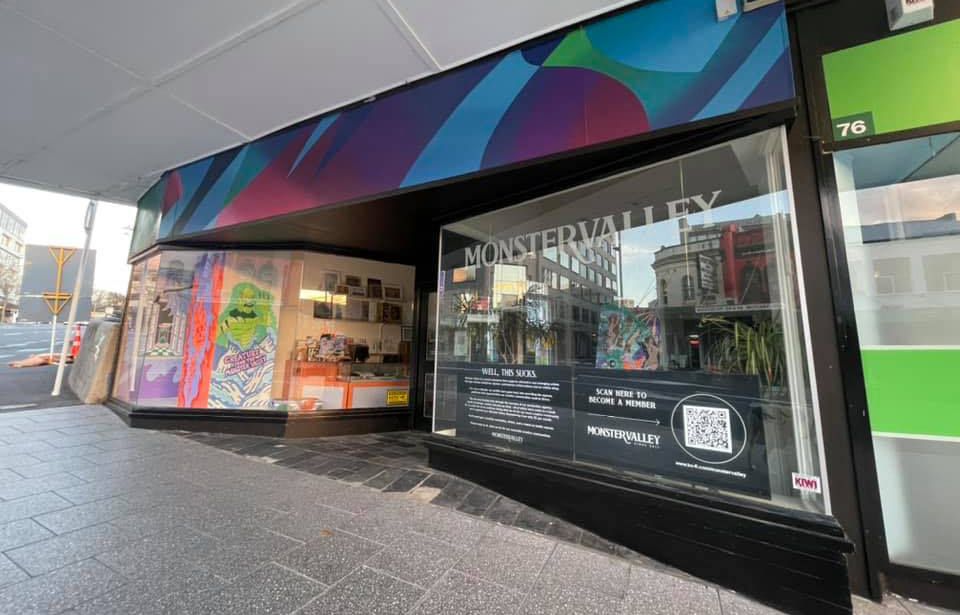 A social enterprise supporting emerging artists is facing an uncertain future as lockdown impacts its ability to operate two weeks after it celebrated its 10th anniversary.

Monster Valley operates as a creative agency but puts the profit from its commercial work into a space for upcoming creatives to create and show their work.

“When we first opened in Mt Eden, we had a lot of blank walls, so I reached out to an artist friend who was storing his work under his bed and asked if he wanted to show it.

“I’ve been running a gallery ever since,” he says.

“It’s a great two-way street. We operate the gallery which allows artists to show and sell their artworks, and we get to collaborate with them on our commercial projects – which also keeps our clients happy because they’re working with fresh thinkers and new talent.”

Now on Karangahape Road, Monster Valley’s space is usually a hive of activity, but Auckland’s level-four lockdown forced the halting of all its projects.

“Covid has been a major impact to the business. Everything has been cancelled,” says Mr Sheridan.

“Most of what we do is content creation – video, photography for events – which have all stopped.”

The gallery is required to stay shut at alert levels 3 and 4, and can only operate in a limited capacity at level 2, so it will be some time before Monster Valley can be fully operational.

“We were supposed to have six art exhibitions over the next eight weeks, all of which have either been cancelled or postponed,” says Mr Sheridan.

“The impact for us, and therefore the artists, is huge. We’ll be building everything up from scratch as soon as we’re out of level restrictions.”

Despite the challenges, Mr Sheridan is resolute in trying to keep the business alive.

“The easy option would be just to stop, rather than trying to keep this model alive – but for the sake of our community of artists, I really do feel I owe it them to keep going and stay open,” he says.

To try to cover costs, the business has launched a membership option, which gives supporters special benefits in return for regular support of its programmes.

Since launching on Monday, about 40 people had signed up, which Mr Sheridan said was encouraging.

“It’s brought out the community, which has been really great. Support like this shows people don’t want to lose spaces like this. They think it’s important that we exist.

“As a small business owner, just knowing there’s a community out there that is egging you on and supporting you in whatever way they can, that’s more important to me than any financial arrangement.”