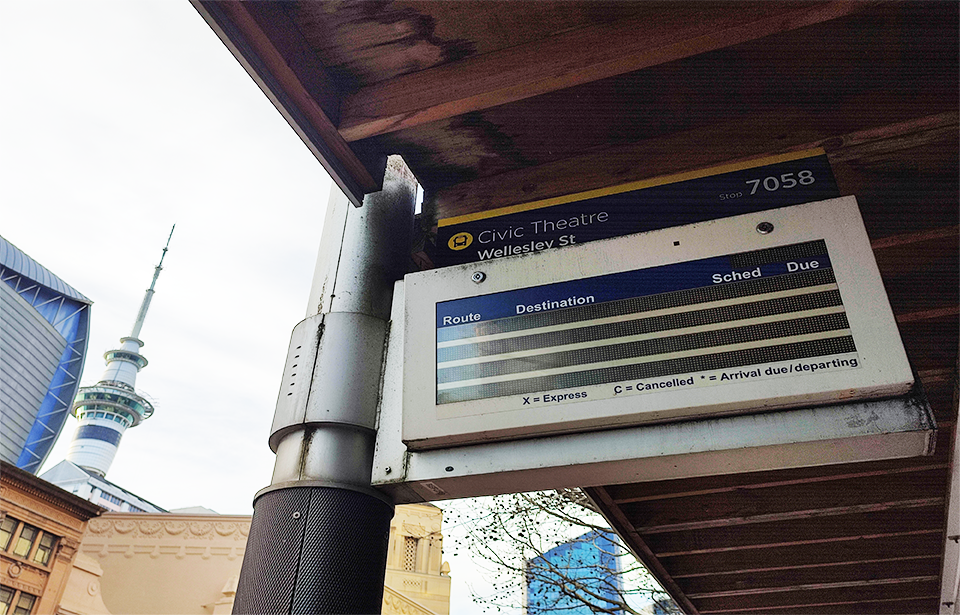 One of two timetables outside the Saint James Theatre. Both have been offline for several weeks. Photo: Regan Harris

If you need to catch a bus on Auckland’s Queen St anytime soon, you may want to consider checking the schedule ahead of time.

That’s because nine of the 11 electronic bus timetables that stand on Queen Street’s main stretch, between Aotea Square and Customs Street, were offline when TWN checked recently.

Some displays, such as the one for bus stop 7054 near Vulcan Lane, had clear signage indicating they were closed due to road works.

Others, such as those for the two stops outside the St James theatre, simply lay dormant, with no indication of when they would be fixed.

This also meant the button-operated audio timetables, a feature for people who are blind or with low vision, were not functioning.

“Electronic bus timetables enable people who are blind, deafblind or have low vision to move freely from place to place.

"Without this, it makes their journey much harder, preventing them from getting to appointments, work, school and social gatherings.

"We cannot afford to let barriers in the built and digital world prevent people from participating fully and equally in society.”

According to a spokesperson for Auckland Transport, the task of maintaining the displays is assigned to several different contractors throughout the city.

“Maintenance to prevent issues is carried out twice a year on every display in Auckland,” they said in an emailed statement.

While the spokesperson confirmed that some displays had been switched off due to ongoing construction on Queen Street, this only accounted for three of the nine displays that were offline.

They encouraged members of the public to contact Auckland Transport if they encounter a broken display.

“If you suspect a display has a fault, please let us know and we’ll request our contractor visit the site ASAP.”