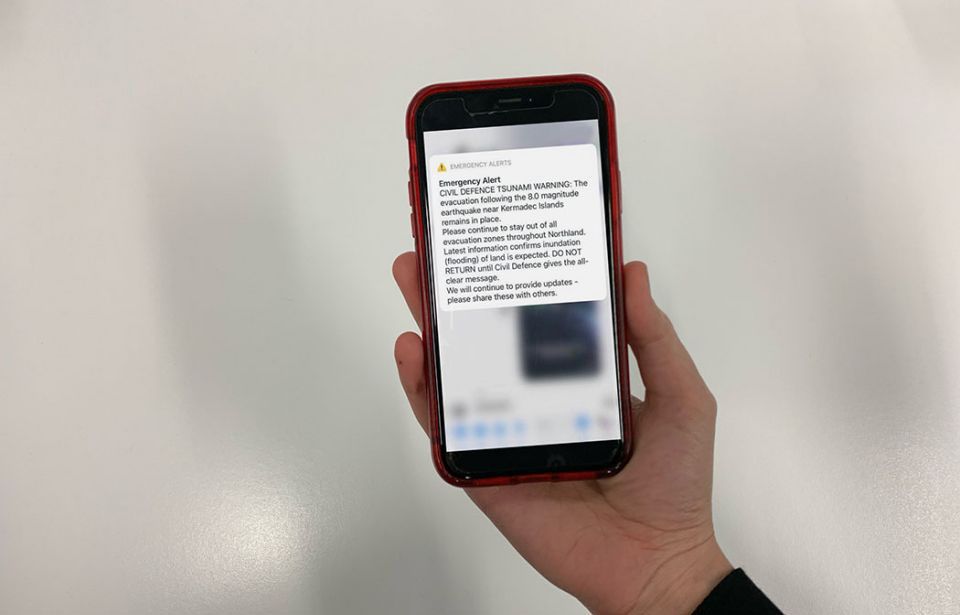 EMERGENCY MOBILE ALERTS DON’T REQUIRE AN INTERNET CONNECTION, BUT THEY DO NEED RELIABLE RECEPTION AND THE LATEST OPERATIVE SYSTEM - Go to CIVILDEFENCE.GOVT.NZ TO CHECK IF YOUR PHONE IS CAPABLE. PHOTO: NADIA SHAW-OWENS

Emergency mobile alerts are now the nation’s biggest defence against a tsunami but it's raising concern around the need for cellphone coverage and up-to-date software - as well as a device to start with.

One in 10 New Zealanders don’t own a smartphone, with Maori and Pacifica, people with disabilities, and rural communities suffering disproportionately from "digital exclusion".

The EMA system can be problematic for many, says Digital Inclusion Alliance Aotearoa’s spokesperson Laurence Zwimpfer.

“There will always be some who fall outside cellphone coverage at the time of the emergency and this is the real challenge," he says.

"This is not just about digitally excluded people; it also affects people living, working or holidaying in very remote rural locations.”

Health, education, and poverty disadvantages are among factors contributing to a lack of access and trust in technology, according to the Citizens Advice Bureau’s 2020 digital exclusion report.

“For those who experience digital services as a barrier, the emphasis on ‘doing things online’ means further disadvantage and leaves many people feeling frustrated, isolated and excluded from being able to fully participate in society,” it said.

But the National Emergency Management Agency (NEMA) is confident that EMA is the way of the future, following its launch in 2017, saying it "has significantly increased our ability to push out messages to the vast majority of the population.”

“The rollout of the EMA system means emergency messages can reach more people than ever before," he said.

"For example, disabled people who find that radio, the internet and television present accessibility barriers may find Emergency Mobile Alert is an effective way of staying informed.

“Emergency Mobile Alert can also be geo-targeted to reach affected communities, and people don’t need to subscribe or sign up.”

Age Concern, a non-for-profit that helps people over 65, says the organisation is here to help the elderly community through the challenges of the digital transition.

“Over the last two COVID years, older people have seen many services transition to digital services – shopping, banking, exercise classes, and more. Many older people have simply learnt to do things online whilst others have found it more challenging," said a spokesperson.

"Communicating change and education is key to the new systems being successful."

Kiwis who can’t receive an EMA have the support of several organisations in NZ, including NEMA, Digital Inclusion Alliance Aotearoa, and Age Concern.

NEMA suggests that individuals without a device should arrange whanau to ring their landline to pass on emergency information and if no other channels reach them, go back to basics.

“Pay attention to the natural warning signs of an emergency, and know what to do to stay safe – for example, drop cover and hold, if it’s long or strong, get gone, and if floodwaters are rising, evacuate."